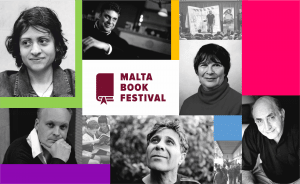 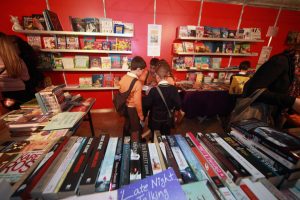 The National Book Council is pleased to announce that preparations for the 2016 Malta Book Festival are underway and would like to inform the public of the dates, location and the kind of events they are invited to experience at the festival.

The event will take place at the Mediterranean Conference Centre in Valletta from the 9th till the 13th November and will be open to the public morning and evenings, including all day on both Saturday and Sunday. Over these five days, members of the public will be invited to visit the baroque halls of the historic hospital of the Knights to be treated to the best book event in the cultural calendar of the island. There they can expect to find numerous stands representing both local and foreign publishers, bookshops, distributors and NGOs. Many of these participants have prepared events with literary themes, including presentations of new publications and their authors, dramatic performances and discussions.

As is now customary, the festival will also feature several events and activities of a cultural and educational nature which have been prepared for both adults and children by the National Book Council. Among these, all of which have been planned and thought out to elicit great interest from the public, a conference on Literature and Totalitarianism will offer the adult public the chance to engage with four brilliant contemporary minds who are among this year’s special guests: Alek Popov, the renowned Bulgarian satirical writer, the British author and academic Patrick McGuinness and the Egyptian novelist Basma Abdel Aziz.

For the second consecutive time we will dedicate an event to honour last year’s winner of the Lifetime Achievement Award, the poetess Maria Grech Ganado. This is a unique opportunity for members of the public to meet the poetess in person, and also to listen to her poetry being recited by professional readers. Maria Grech Ganado, who made history when she became the first woman to be appointed full time lecturer at Malta University, is a bilingual poetess and has published four collections of poems in Maltese, the latest being ‘Taħt il-Kpiepel t’Għajnejja’ (2014.) Her ‘Jum San Valentin’ is arguably one of the best known (and best loved) poems in Maltese.

Friday’s evening events will be dedicated almost entirely to Poetry and to this end the NBC will be organising a second event in collaboration with the Maltese Poets Association, where apart from selected readings, the winners of the Mons. Amante Buontempo Poetry Contest 2016 will be announced.

This year the festival will also feature a one-day conference on the theme of literacy and publication, entitled Books and Literacy: yesterday, today and tomorrow. The product of a cooperative effort by the National Book Council and the Department of Library Information and Archive Science at Malta University, the conference will focus on books and literacy as functioning correlates  in the history of publishing right up to the modern technological era. Naturally enough, it will zoom into the modern era to see how the extension of the term ‘literacy’ – to include digital, visual and cyber literacies – can coexist with what is now percieved as ‘traditional literacy.’ There will be contributions by both British and Maltese speakers.

As usual, the festival will also include a thematic exhibition, to be housed within the Perello Suite of the Mediterranean Conference Centre, this year on the subject of book-binding. The public should expect an informative and well-presented display of various handmade books by local craftsmen, discussions and workshops on the making of a codex.

Another event -or set of events- of equal importance is reserved for students on weekday mornings, that is on Wednesday, Thursday and Friday, and involves activities such as dramatic performances based on the winning titles of this year’s Terramaxka Book Prize and a contest where students will be asked to fashion out costumes from recycled books and magazines. In addition, there will be actors dressed up as well-known literary figures who will interact with the young visitors as they guide them through the stands and different features of the festival. It is important to mention that a 3-euro voucher will be presented to every student to encourage them to buy a book for themselves. The vouchers are nontransferable and must be redeemed on the same day they are handed out.

Saturday evening closes off with a highlight event, the short film premiere in Temi Zammit Hall at MCC. This year’s winner of the NBC PBS Short Film Contest is Ryan Gatt who will be adapting Walid Nabhan’s short story ‘Il-Kompliċi’ from the collection of short stories ‘lura d-dar u ġrajjiet oħra li ma ġrawx’ (Klabb Kotba Maltin, 2009) and the event, which is open to all free of charge, will present the audience with the opportunity to meet the young film director, the award winning author and others in a discussion about literary adaptation into film.

The number of attendees to the Malta Book Festival has increased substantially in the last three years and for this year the National Book Council is expecting record attendance, making the 2016 Malta Book Festival the biggest book festival ever held in the Islands.

Alek Popov is known to the public mainly on the strength of  his brilliant (and sobering) parody of postcommunist democratic Bulgaria, ‘Mission London’, which has been made into a film of the same name and which will be screened during the festival. His latest novel, ‘The Black Box’, has been described as  a “darkly comical tale of disillusionment”. It explores the nature of our modern neoliberal capitalist systems and how they feed on our natural tendencies toward greed and recklessness.

Patrick McGuinness is Professor of French and Comparative Literature at the University of Oxford. His contributions to the study of French symbolist and decadent poetry include translations of Stéphane Mallarmé, which have filled a huge academic gap as it was notoriously difficult before to come across convincing English language translations of the immensely important French poet.

‘The Last Hundred Days’, nominated for the Man Booker Prize in 2011, is his first novel. It is essentially a thriller set in the paranoid totalitarian regime of Ceaușescu’s Romania, where spying on the citizens’ private lives threatens to infect all forms of social contact with the pathology of mutual distrust. The protagonist is an English student teaching in Bucharest, where McGuinness himself lived in the years leading up to the revolution.

Basma Abdel Aziz, whose debut novel ‘The Queue’ has drawn comparisons to classics of dystopian and surrealist fiction like ‘The Trial’ by Franz Kafka and Jose Saramago’s ‘Blindness’, is possibly the most representative novelist of the new wave of Middle Eastern writers coming to terms with the bitter disappointment following the events known in the West as the Arab Spring. She is also a well-known human rights activist and has written extensively on the subject of torture and human rights violation by the Egyptian security forces during the unstable years following the revolts.

Gilbert Sinoué is a classically trained guitarist, author, scriptwriter and screenwriter whose first novel ‘La Pourpre et l’olivier, ou Calixte 1er le pape oublié’, (The Crimson and the Olive Tree, or Calixte I the Forgotten Pope) which he published at the age of 40, earned him the Jean d’Heurs prize for best historical novel. His novels and other books span a variety of genres. For ‘The Egyptian’, the first of a saga set in Egypt of the 18th and 19th centuries published in 1991, Sinoué was awarded the literary prize Quartier latin, and his thriller ‘Les Silences de Dieu’ (The Silences of God) earned him the Grand prix de littérature policière in 2004.