The Art of Protest at the 2020 Campus Book Festival 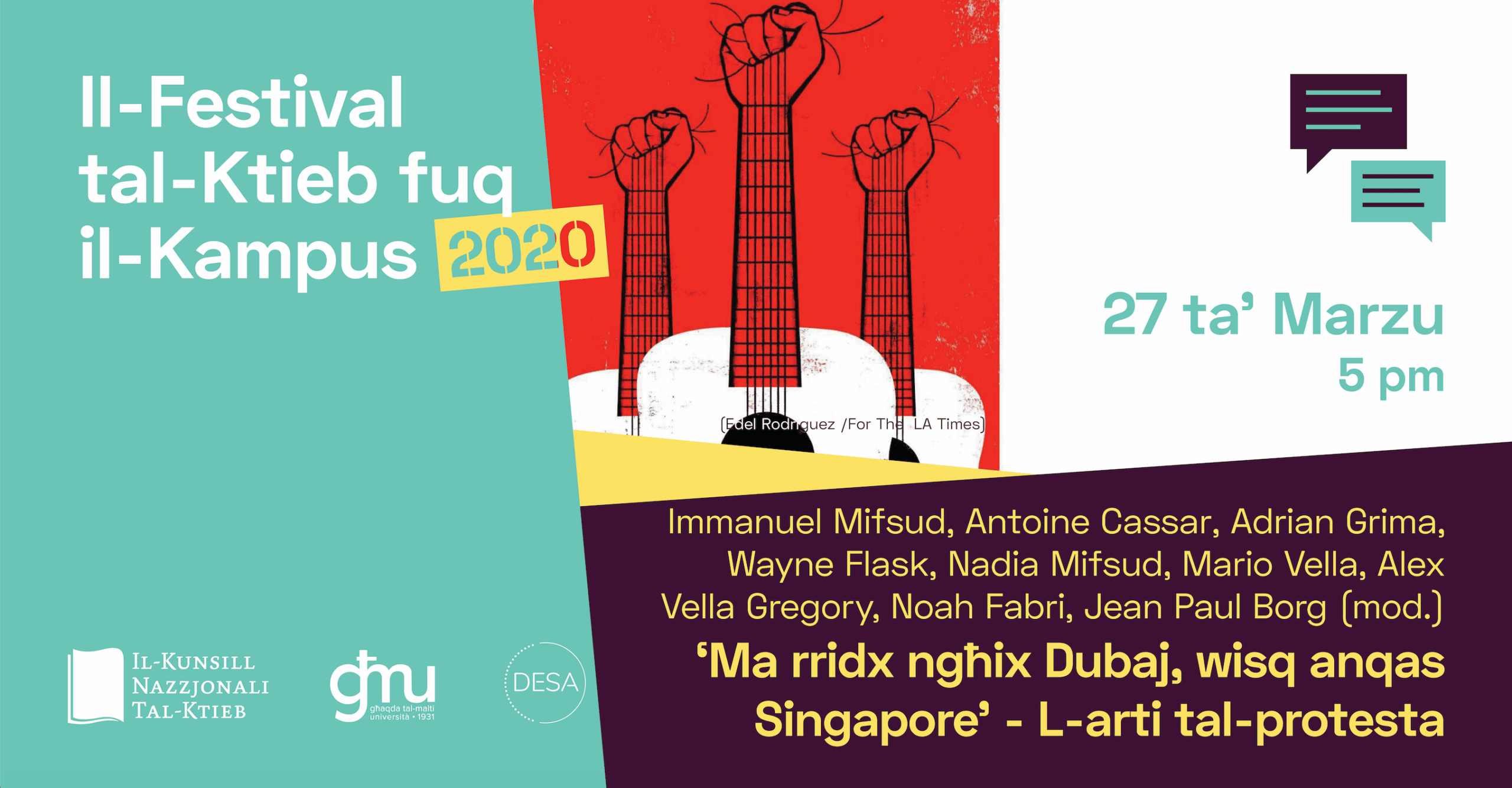 Drawing on the recent contributions from local artists and writers, the 2020 Campus Book Festival is dedicating an evening to literature and music of protest. The National Book Council has invited a number of established and emerging literary writers and musical practitioners to participate in a roundtable discussion starting at 5 pm on Friday 27 March, and an Open Mic session at 6:45 pm. Mark Doty, the American poet and winner of a number of prestigious literary awards including the T. S. Eliot Prize and the U.S. National Book Award, is expected to be reading from his works at the Open Mic.

Protest literature has been afforded many definitions. It is at times shocking, seeks to engender empathy, or is a direct or symbolic form of activism. But it all recognises the necessity for change and reaches out to its reader to share its values, as a guide, or by drawing a mirror to society. The various expressions of protest literature in Malta, written and performed over the past months and beyond, will be discussed in the roundtable discussion with the title ‘The Art of Protest’, moderated by Jean Paul Borg and with the participation of Immanuel Mifsud, Antoine Cassar, Adrian Grima, Wayne Flask, Nadia Mifsud Mutschler, Mario Vella, Alex Vella Gregory, and Noah Fabri.

The Open Mic is once again being organised in collaboration with Inizjamed. The event will be carrying the same theme and sets out to open a space for the oral performance of poetry, prose and song. It is open to all students and the general public to share their works or simply listen to the works from an outstanding line-up of confirmed writers and performers.

Nadia Mifsud has published two poetry collections: żugraga (2009) and kantuniera ’l bogħod, which was awarded the 2016 National Book Prize for Poetry. She is also a three-time winner of the National Poetry Contest. Her debut novel Ir-rota daret dawra (kważi) sħiħa was published in 2017 and several of her short stories have been published in anthologies both in Malta and abroad. Her translation of Immanuel Mifsud’s novel In the name of the father (and of the son) was published in France by Gallimard in 2016.

Immanuel Mifsud is the author of a number of acclaimed short-story collections, novels and poetry books. He was awarded the European Union Prize for Literature with his book Fl-Isem tal-Missier (u tal-Iben), which has since been translated to eight languages. His most recent publication is L-Aqwa Żmien (Klabb Kotba Maltin, 2019), the collection of short stories shining a light on the stories of the people contemporary society has left behind.

Antoine Cassar is a Maltese poet and translator known for his book-length poem Erbgħin Jum (EDE books, 2017), and Passaport (2009, 2020). Erbgħin Jum, which deals with the overcoming of trauma through walking, was awarded the National Book Prize for Poetry and was shortlisted for the 2020 Gdansk European Poet of Freedom Award. Passaport, a long poem printed in the form of an anti-passport, has been published in eleven languages.

Adrian Grima is a poet and lecturer on Maltese literature at the University of Malta, where he also coordinates the research project ‘It-Tradizzjoni Orali’. He has presented his works at various conferences and his poetry has appeared in anthologies printed all over Europe. In 2019 he has collaborated with jazz musician Domnic Galea on the poetry album Skizzi għas-Sette Giugno. Grima is also the general editor of the Sensiela Juann Mamo published by SKS in 2013.

Mario Vella is the singer-songwriter of Maltese band Brikkuni. Their celebrated first album Kuntrabanda (2008) paved the way for a significant revival in Maltese-language popular music. Versions of some of the song lyrics had been first published as poems in the anthology Ħbula Stirati (2007). The title of the roundtable discussion, “Ma rridx ngħix Dubaj, wisq anqas Singapore”, is taken from Brikkuni’s song ‘Alla lliberani’, released in November 2019.

Alex Vella Gregory holds a PhD in Music Composition with Edinburgh Napier University. He is composer, pianist and teacher whose works have been performed in many venues both in Malta and abroad, including Edinburgh, Vienna, Italy and Washington DC. He is also the Artistic Director and a founding member of the Cappella Sanctae Catharinae choir. Velle Gregory is also known for his satirical cabaret act performed by the irreverent alter-ego Ċikku l-Poplu.

Noah Fabri is an experimental folk musician and member of Moviment Graffitti. He has released three albums on his Bandcamp page over the past two years. His most recent outing, the album Karmaġenn, is the result of a multi-disciplinary, collaborative project recounting a coming-of-age story of a group of Junior College students and has been released in December 2019.