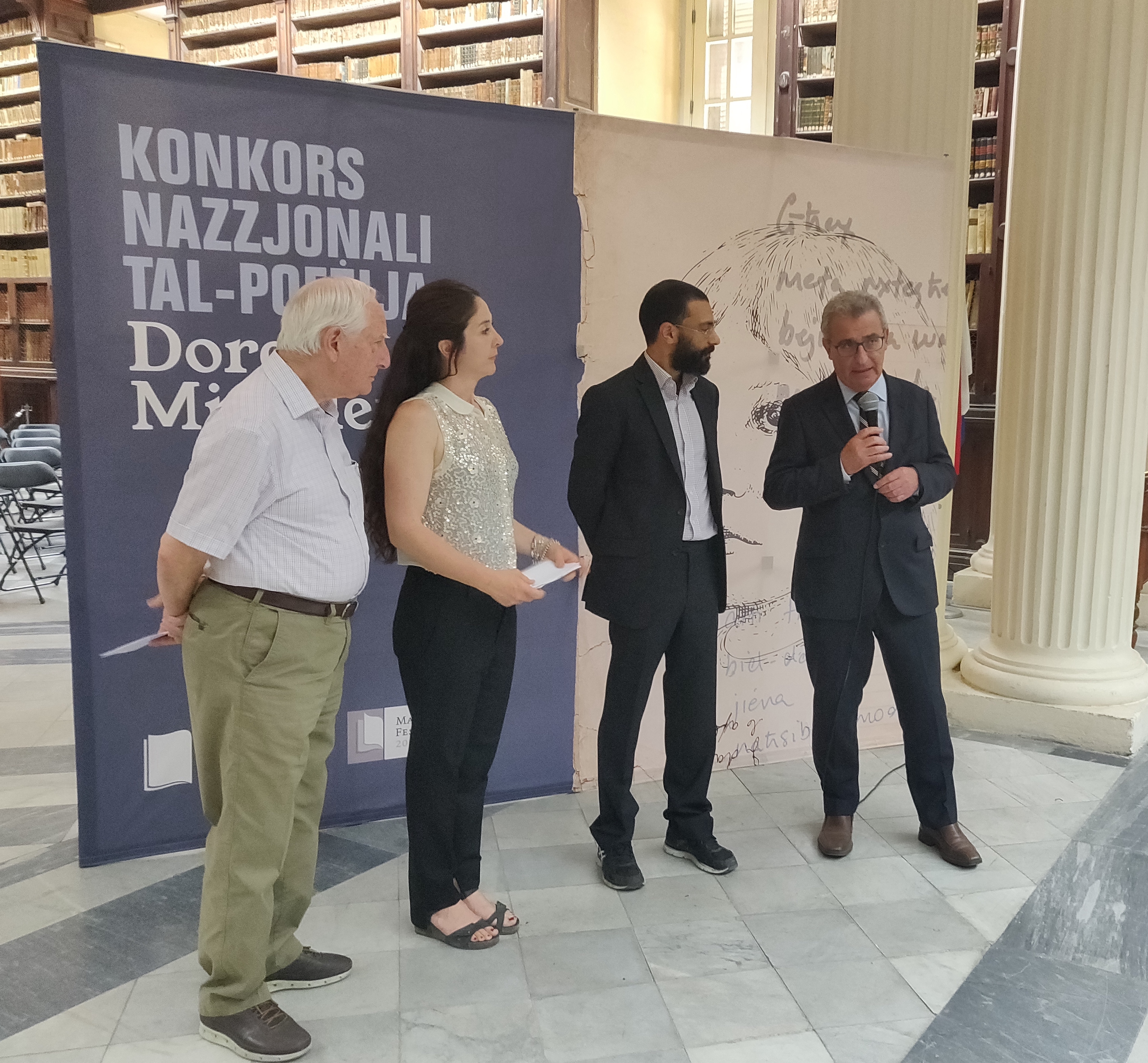 The Executive Chairman of the National Book Council Mark Camilleri, in the presence of the Minister for Education and Employment Evarist Bartolo, launched the first edition of the Doreen Micallef National Poetry Contest during a press conference held at the National Library of Malta in Valletta.

In his speech, Camilleri explained that in carrying the name of Doreen Micallef (1949-2001), the National Poetry Contest is celebrating one of the most distinctive voices of her generation, a voice that was intimate, confessional, and female.

The Executive Chairman of the National Book Council noted that the Doreen Micallef National Poetry Contest is aimed at further raising the profile of poetry in Malta and at encouraging the writing of poetry in the Maltese language. Camilleri also referred to the increasing number of emerging writers active in Malta, stating that although the local scene does not have a long tradition, it can nonetheless boast of writers who enriched it greatly. Camilleri mentioned the National Poet, Dun Karm, and pointed out that it was he who elevated Maltese language to a new level of literary consciousness by employing it in his poetry during the second decade of the 20th century, when just before that he used to write only in Italian. In this light, and in her unique way, Doreen Micallef influenced poets and writers that came after her in the same way that Dun Karm ushered a new generation of poets during his time. Camilleri ended his speech by noticing that the Contest will provide an opportunity for budding and more established writers to evaluate their own abilities and the hallmarks of a good poem in Maltese.

On his behalf, Hon. Minister Bartolo reiterated the importance of poetry in further enriching language and culture. He paid attention to Doreen Micallef’s poetry as a perfect example to which aspiring and emerging poets can look up.

Poet Victor Fenech, winner of the 2017 Lifetime Achievement Award by the National Book Council, took the stage and remarked that Doreen’s impassioned writing is a testimony of a life dedicated to reading and writing. He added that Doreen caught the Moviment Qawmien Letterarju of the sixties by surprise, event though she had been writing for a long time in the shade of a life of solitude and suffering.

Finally, Simona Cassano, Senior Manager at the NBC, listed the rules and regulations for participation in this Contest. These can be found on the Council’s website.

Together with a filled-in application form, applicants are invited to submit 3 copies of one poem in Maltese, not exceeding 36 verses in length. Poems should only be signed by a nom de plume and must not have appeared in print before, be it in published anthologies or in journals. Poets cannot submit more than one entry. The entries for the poetry contest are to be sent to the National Book Council, Central Public Library, Prof. Joseph J. Mangion Street, Floriana FRN 1800, by no later than 23 August 2019.

A jury panel nominated by the National Book Council will be awarding the three poems that score the highest mark. In their evaluation of the entries the jury will apply a set of criteria. Broadly speaking, the jury are required to identify and reward authenticity, imagination, distinctiveness of voice, and original and inspiring use of rhythm and figures of speech. However, other matters such as consistency of register, orthography, grammar, visual aspect and many more carry considerable weight in the evaluation. All participants are urged to download the criteria and study them carefully.

The poem that wins the first prize will be awarded € 1,000; the two runners-up will be each getting a book voucher to spend in bookshops across the country. The jury panel reserves the right not to issue the awards if it deems submissions not to have reached the required standard. Members of the board or of the administration of the National Book Council are barred from participating in the Contest.

The full contest regulations, criteria and application form can be found on the National Book Council website.