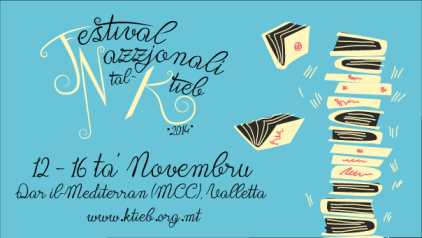 The National Book Council (NBC) would like to announce that the 2014 edition of the National Book Festival will be held next 12 – 16th November at the Mediterranean Conference Centre.

The National Book Festival is a continuation of the National Book Fair which has been re-branded in 2013 in the NBC’s efforts to increase the cultural value of this prestigious annual event.

The aim behind the festival is to promote Maltese books to both local and foreign audiences and offer the local scene a cultural experience which reflects the latest trends in the international book scene.

The NBC is capitalizing on last year’s winning formula and packing this year’s National Book Festival with cultural events and initiatives. Local publishers and authors will be holding their own events to promote their latest works and publications while NGOs and other entities will also be holding lectures and debates.

Foreign participation in this year’s Festival will be marked by the presence of the French and Italians thanks to the French Embassy and the Italian Cultural Institute respectively.

Schoolchildren will be given a €2 book voucher each to be redeemed during their visit to the Festival, whilst publishers are being subsidized to hold yet more interesting events on a larger scale. NGOs related to the book sector will be participating with a stand provided by the NBC free of charge.

A major project to be launched by the NBC in collaboration with ONE at the Book Festival is a short-film based on one of Immanuel Mifsud’s short stories. The aim of this NBC project is to initiate an integration between the book-market and the world of TV and film.

It is predicted that this year’s National Book Festival is to be one of the most vibrant and exciting major book events ever to have taken place in Malta.

This years National Book Festival is being co-sponsored by APS Bank.