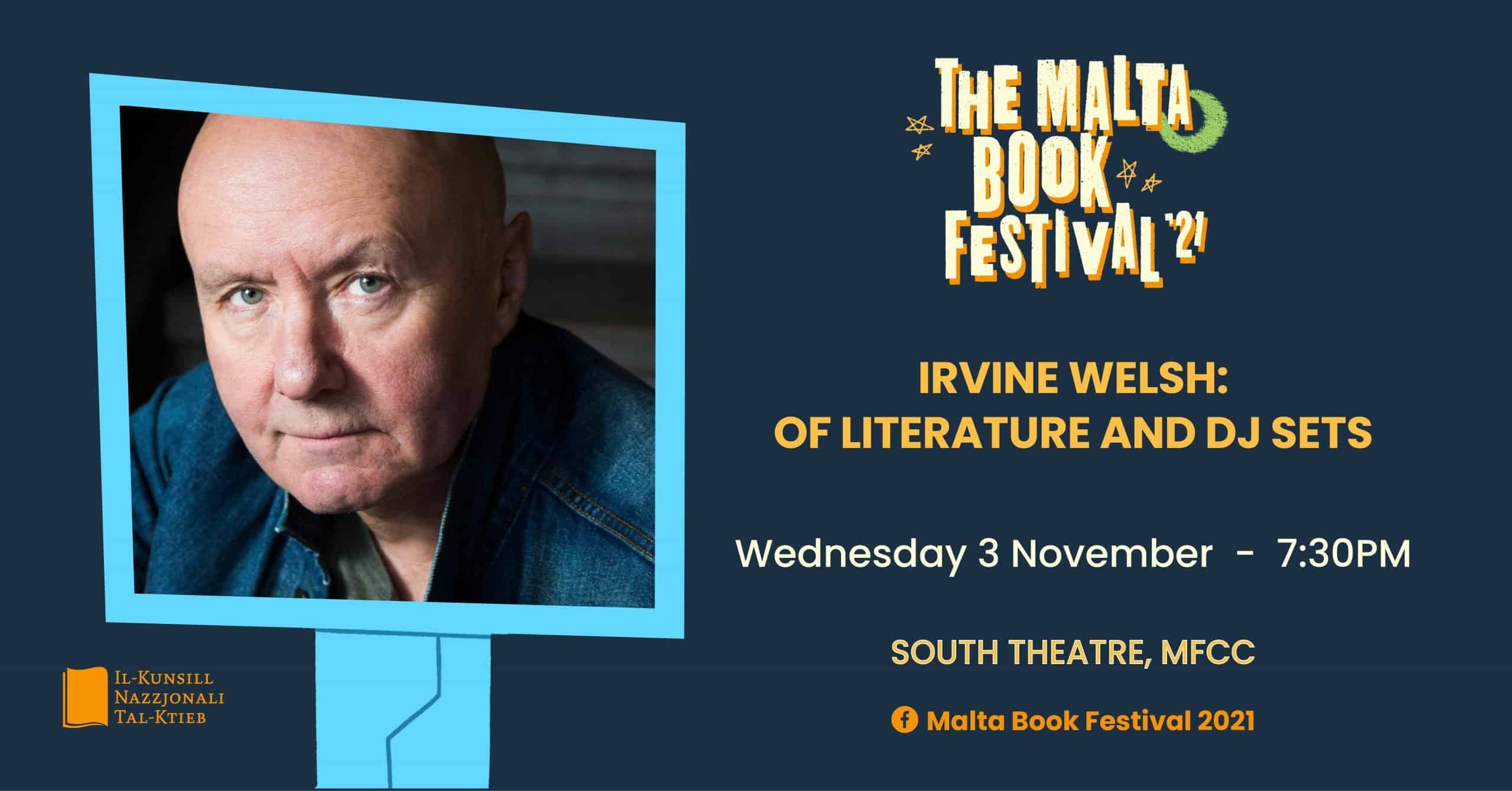 ​​Irvine Welsh, the master author of dark, gritty, seedy no-nonsense ‘say it like it is’ Scottish culture novelist and special guest of the 2021 Malta Book Festival, will be sitting down for an extended interview discussing his life and works with Wayne Flask the author of Maltese political satires.   This event will be followed by a book signing session.

Irvine Welsh shot to fame in 1993 with the publication of Trainspotting, since adapted into the iconic film by Danny Boyle. Despite the unease from the critical establishment, Welsh’s novel received as many good reviews as ones swathed in disgust and outrage – establishing a tradition that continues to this day. Following Trainspotting, which has now sold almost 1 million copies in the UK alone, he continued to write and publish prolifically, remaining a controversial figure whose novels, stage and screen plays, novellas and short stories have proved difficult for literary critics to assimilate – a difficulty made only more noticeable by Welsh’s continued commercial success. His novels and short stories, known brutal depiction of Edinburgh life, raw Scots dialect, drug use and rave culture, include Marabou Stork Nightmares (1995), Porno (2002), Crime (2008), Skagboys (2012) and the finale to the saga following the characters of Trainspotting, Dead Men’s Trousers (2018). For most of his life Irvine Welsh has been involved in dance music, as a DJ and producer, and has recently branched into film as a director and partner in two film production companies.

Wayne Flask started his career as music journalist in 1998 as a contributor with The Malta Independent on Sunday, The Sunday Times, Manic! and Tune-in Magazine. He is an activist in Moviment Graffiti and the author of the satiric works exposing Malta’s political class Kapitali (Merlin Publishers, 2017), and the play Sibna ż-Żejt performed for Staġu Teatru Malti in 2015.

Pre-registration for all Malta Book Festival programme events is mandatory.
Book your place at:
https://www.showshappening.com/

Admittance to this Festival event shall be exclusively on presentation of a valid vaccination certificate.

Visits to the Bookshop retail area are not subject to pre-registration or the presentation of a valid vaccination certificate.