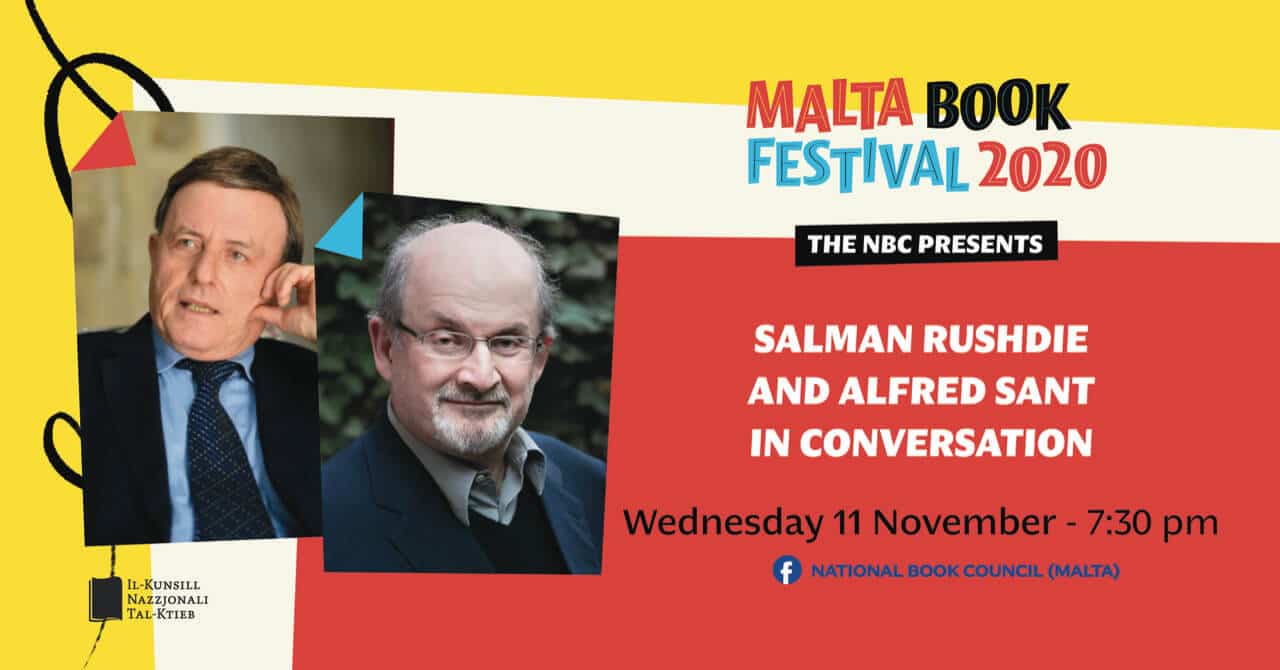 The special guest of the 2020 Malta Book Festival and one of the most celebrated authors of our time, Sir Salman Rushdie will be joining another towering figure of Maltese literature, Dr Alfred Sant, for a conversation shedding light on the achievements, influences and current preoccupations of the two great writers and their respective cultural milieu. The discussion will be moderated by Prof. Clare E Vassallo, Associate Professor of Semiotics and Translation Studies at the University of Malta.

A brilliant provocateur, Sir Salman Rushdie has penned a handful of classic novels, influenced a generation of writers, and received a Queen’s Knighthood for his “services to literature.” He stands as both a pop culture icon and one of the most thought-provoking proponents for free speech today.

Sir Salman Rushdie’s novels, greeted always with anticipation and acclaim, include The Satanic Verses, The Moor’s Last Sigh, and his masterwork of magic realism, Midnight’s Children, for which he won the prestigious Booker Prize, and later, the Best of the Booker. The reception for his most recent work, Quichotte, has proven no different: included in TIME’s list of 100 Must-Read Books of 2019, and named one of The Financial Times’ Best Books of 2019—who also called the novel “brilliant…a perfect fit for a moment of transcontinental derangement”. Quichotte was also a shortlisted finalist for the 2019 Booker Prize.

In a long and distinguished literary career, Dr Alfred Sant authored a notable list of published works ranging from novels, short stories and plays, as well as political and autobiographical writings. On five different occasions and in different categories he’s been the recipient of the National Book Prize, and most recently the National Book Prize Lifetime Achievement Award in 2019. Between 1996 and 1998 he served as Prime Minister of Malta and was elected as a Member of the European Parliament in the 2014 and 2019 elections.

His first novel, L-Ewwel Weraq tal-Bajtar (1968), published when he was only 19 is a watershed moment in the development of the Maltese literature, announcing the advent of the contemporary novel. Other landmark novels include the early-seventies set Silġ fuq Kemmuna (1982) and La Bidu, La Tmiem – 1599 (2001), a historical epic praised for its capacity to meld “political, economic, social and cultural viewpoints…while never failing to deal with humanity’s existential conundrum” (Mario Azzopardi, Times of Malta). Sant is also a renowned playwright, his most recent is the satirical Balzunetta Towers (2017) which took on Malta’ construction obsessed mind-set and the power of money over the political class – it was performed as part of the Valletta 2018 European Capital of Culture programme.

This is a live event.