‘Literature in the Diaspora’: the opening conference of the 2018 Malta Book Festival 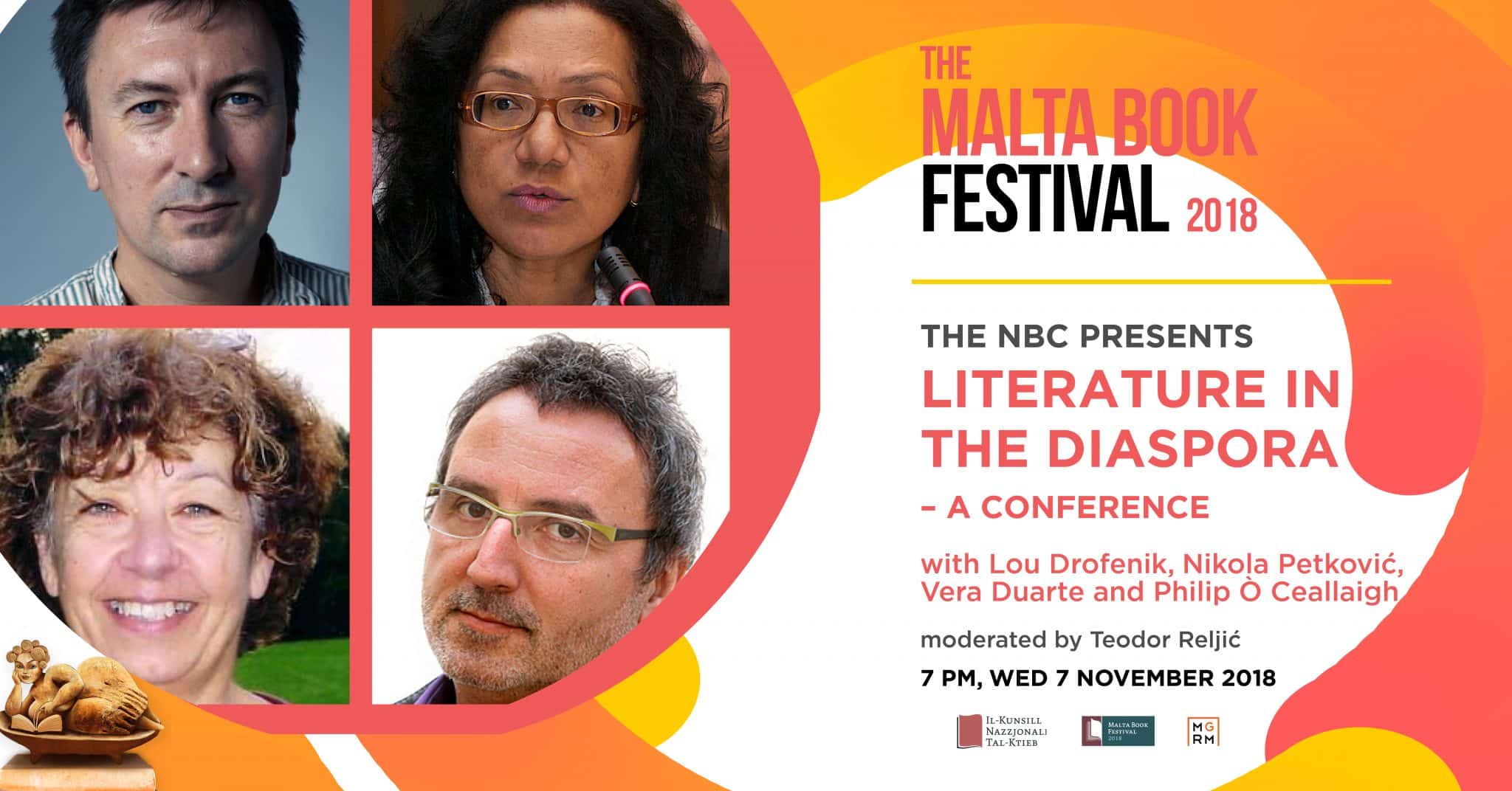 The 2018 Malta Book Festival, the most prominent and prestigious book celebration of the year, opens for the public on Wednesday 7 November with a conference on ‘Literature in the Diaspora’ organised by the National Book Council.

Led by journalist and writer Teodor Reljić (Serbia/Malta), the conference will bring together Lou Drofenik (Malta), Nikola Petković (Croatia), Vera Duarte (Capo Verde) and Philip Ò Ceallaigh (Ireland), four writers who have all experienced displacement in their own unique way. Time will be dedicated to their individual responses to the literary diaspora, how their own social and political contexts shape their view of the literary diasporas most relevant to their situation.

The realities discussed will be tied by the same knot: reflection in literature, while also allowing for a discussion of the more intimate and psychologically probing elements inherent in diasporic literature. Within this framework/conference question, the literary diaspora’s claim on intellectual, aesthetic and political ambiguity will be placed front and centre, and employed to offset the discussion of urgent political realities – among them the so-called “migration crisis”.

The direct correlation between desire and longing within the scope of the diaspora will be explored, as well as how the topic incorporates the encounter with the Other, and how writers implement safeguards against the exoticisation of that same Other, and the ‘foreignness’ into which they are placed into – by choice or otherwise.

Less than a bid for definitive definitions of diaspora or a list of the diasporic qualities in the literature of all the participants involved, the conference will aim to have a wider discussion on how the notion of diaspora continues to be a fruitful literary pursuit for writers the world over.

Lou Drofenik’s fiction is founded on extensive historical research and focuses on the migrant experience, specifically in a Maltese-Australian context. Lou grew up in Malta and now lives in Victoria, Australia. She was awarded the National Book Prize 2017 for prose for her novel The Confectioner’s Daughter (Horizons, 2016).

Nikola Petković’s fields of expertise include ethnic, national, racial, and class identities; cultures of Central Europe; and intercultural communication. Nikola is a Croatian writer, literary critic, translator, screenwriter, and scholar. As Miloš Đurđević writes, “In Petković’s poetry, various forms and aspects of exile are described, including self-exile and preventive exile, as well as the impossibility to leave and abandon oneself.” (source: https://www.poetryinternationalweb.net/pi/site/poet/item/19294/17/Nikola-Petkovic)

A member of the Cape Verdean Academy of Letters, Vera Duarte has been involved in national and international organisations related to women’s rights, culture and human rights. She has published numerous poetry books, novels, essays and chronicles. A Matriarca, Vera Duarte’s latest novel, is a polyphonic novel that portrays a diasporic Cape Verdean society (it is a well-known fact that more Cabo Verdeans live abroad than in Cape Verde itself). Based on two love stories, the novel attempts at depicting the history of Cape Verde and Africa as a whole.

Philip Ó Ceallaigh is an Irish writer and a translator who is based in Romania. He does not think so much of himself as writing “about” places so much as using them to write about the things that interest him. In other words, the imaginative act is of greater importance than the descriptive one. He has published over forty stories, many of which collected in Notes from a Turkish Whorehouse, for which he was awarded the Rooney Prize for Irish Literature. Among other books, he has translated Mikhail Sebastian’s For Two Thousand Years, published by Penguin Classics.

The conference ‘Literature in the Diaspora’ will be held on Wednesday 7 November at 7 pm in the Activity Area, Sacra Infermeria Hall, Mediterranean Conference Centre. Members of the public are invited to join Lou Drofenik, Nikola Petković, Vera Duarte and Philip Ò Ceallaigh along with Teodor Reljić, in an attempt to find a pattern in their own personal literary diasporas through their work and life. At the end of the discussion, the participants will take questions and comments from the public.

This year’s festival will take place at the Mediterranean Conference Centre, Valletta, starting from Wednesday 7 November and going on till Sunday 11 November. The programme of events will be delivered in printed form to all households in Malta and Gozo in the next two weeks.