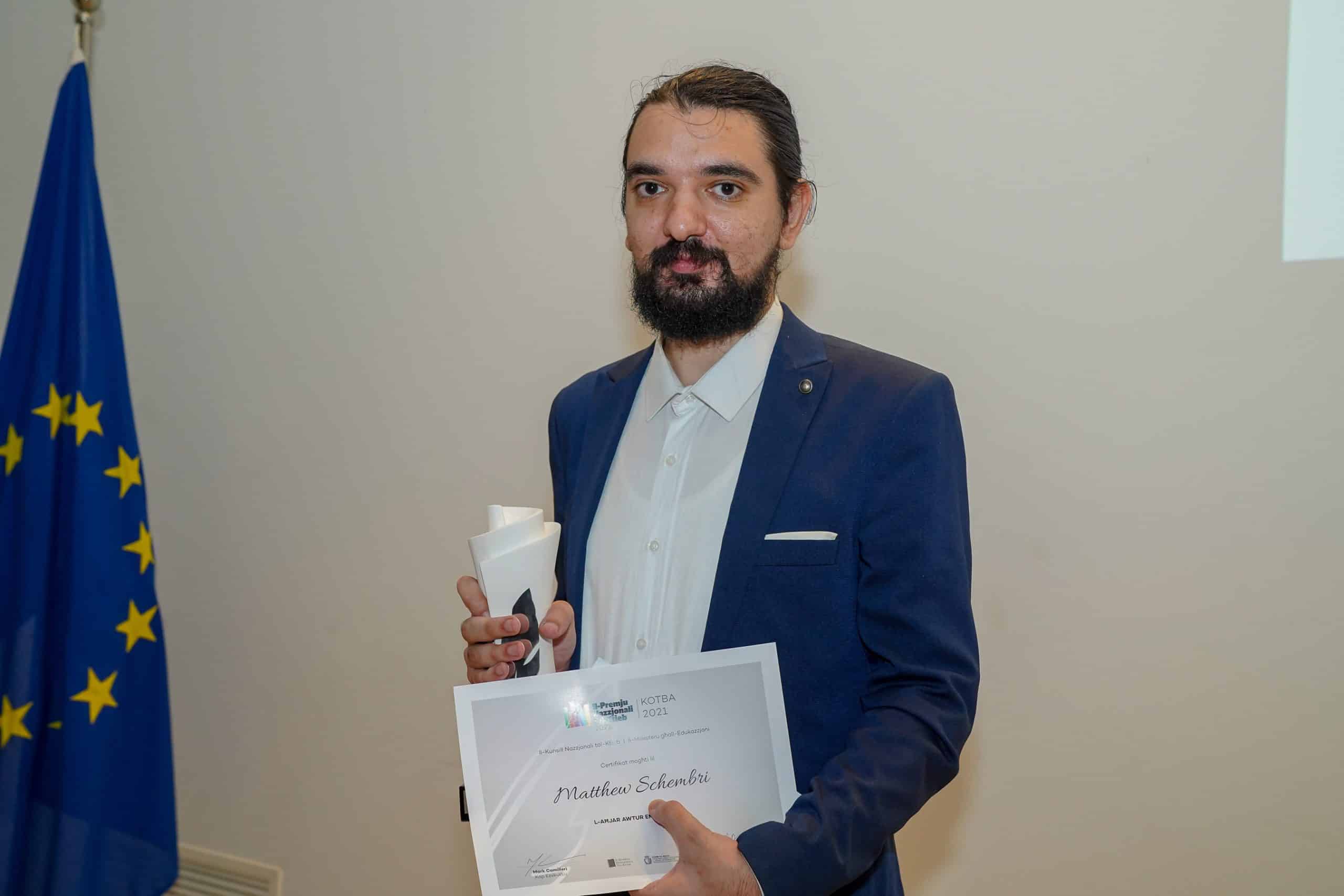 The winners of The National Book Prize were announced in November. Amongst the categories which have aroused interest, such as the Terramaxka Prize or the novels category, there were also the special prizes which were not based on specific literary works.

One such prize, that of the Prize for Best Emergent Author has been unanimously awarded by the Board of the National Book Council (NBC), to Matthew Schembri (b. 1993). This special prize is awarded to young authors who have distinguished themselves through their writing and artistic work.

The best author and the best young artist of the year

Matthew Schembri is an artist and writer based in Malta. He obtained a Masters in Digital Art in 2017 and a Diploma in Maltese Literature in 2020. When one looks at his artistic and literary portfolio, one cannot fail to notice that since 2015 Schembri has persistently practised his craft, whilst being awarded multiple times. In fact, the first award he won with the NBC is the Literary Contest of Novels for Youth, in 2016, with the manuscript Stessi, later published by Merlin Publishers.

That said, this was not the first prize won by Schembri. In 2015, he was the recipient of the Divergent Thinkers 04 prize, by Aġenzija Żgħażagħ and Spazju Kreattiv, for his artistic work: Social Kitchen, and he was also awarded the Young Artist of the Year by Arts Council Malta in 2017.

In an interview held in 2018 on Malta Today by Teodor Reljić, Matthew Schembri spoke of his solo exhibition WiN, whose theme revolved around the personal loss and mourning of the author and artist. Schembri went further and admitted that he identified himself more as an author, than as a visual artist, with some of his works already having been published on Leħen il-Malti and Taħżiż.

In this interview Schembri shared his thoughts regarding the personal and interpersonal world within the arts, as well as his will to continuously change what is considered as art, and the exhibition itself. He concluded that it is his prerogative to write more books and create more art, in order to be truly considered as an author and artist. Later that year he participated and won the artistic competition Shifting Contexts.

Literary innovation from Stessi to Ħassartek

To date, Schembri has published two books: Stessi – a Science Fiction Novel aimed at youths between 11 and 13 years of age, that speaks of sickness, relationships and narcissism, and Ħassartek – a collection of poems formed out of the erasing of words from his novel Stessi.

The method of erasure poetry, or blanked verse was first used in Malta by Schembri, in the above mentioned work. This process and method was commented upon by both Mark Vella, in the literary page of the NBC, as well as Glen Calleja.

Vella looks at Schembri’s literary development from Stessi to Ħassartek by noticing that the act of erasing parts of one’s own book is rather an act of erasing parts of yourself, therefore becoming an identification journey within a literary framework. As he compares the author with a “lantern towards the future of Maltese literature”, he says that this new author needs to be noted for his imaginative artistic practice. From his end, Calleja sees the act of erasure from one’s book as “[…] ironic. If it is not so, then it is a continuation of a searching process, as if Matthew realised that his first book could be improved, with words falling short of what he truly wanted to transmit. He wanted more.” One should also note that the book was accompanied by Schembri’s second solo artistic exhibition that took place in Studio Solipsis, and curated by Raphael Vella.

An Event Night showcasing the work of Matt(hew) Schembri, Malta School of Art, 2017

The Literary Contest of Novels for Youth, Aġenzija Żgħażagħ and The National Book Council, 2016