Results of the Malta Literary Short Film Contest are Out 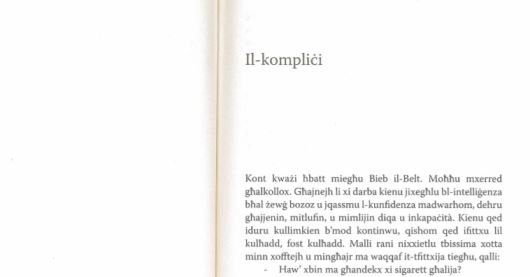 The National Book Council is pleased to announce that the Adjudication Board for the Malta Literary Short Film Contest 2017 has reached a unanimous decision and have awarded funding to the project Dritt għall-Punt, presented by Mr. Charles Stroud and his company Mitħolma. The project proposal is the screen adaptation of the short story Dritt għall-Punt from Joe Friggieri’s latest publication Nismagħhom Jgħidu (Kite Group, 2016).

In Friggieri’s story, which was chosen by literary critic Paul Xuereb as the story with the strongest narrative structure in the whole collection of twenty short stories, a liberal writer in a country under the yoke of a tyrannical regime has to defend himself against the accusations that a bitterly sarcastic police officer confronts him with. The strained conversation between the writer and the police officer generates the dramatic action, which is typical of Friggieri’s work for the theatre. The judges felt that the proposal correctly identified and exploited this aspect of the narrative and that the proposed adaptation has the potential to bring out the themes and motifs that are essential to the vision of the author.

Following an interview and presentation on the proposal by Mr Charles Stroud and Mr. Matthew Stroud, the judges were convinced of the feasibility of the project and of the proposed time-frames and budget for the film production. The film, whose production will start in the coming weeks, should be ready for its first screening by November, when it will feature in a special event at the 2017 edition of the Malta Book Festival (MCC, Valletta, 8-13 November 2017). Visitors to the Festival will be able to watch the premier screening of the film free-of-charge and will have the opportunity to meet both the director of the film and the author during the mentioned event.

The Malta Literary Short Film Contest is open to film-making teams making short films in Maltese of a duration of 15 to 20 minutes, based on a published Maltese short story. To apply, the team must submit a script along with a Project Plan which includes a breakdown of the budget. The chosen proposal will receive €20,000 in funding from the National Book Council (NBC) and consultation services from the same Adjudication Board that awards the funding. NBC also allocates a €1000 grant to the author of the original short story as compensation for the use of his story, which grant will this year be offered to Prof. Joe Friggieri.

The members of the Adjudication Board for this year were Charles Calleja Storace, Andrei Vella Laurenti and Ruben Zammit. Throughout the production period, the team must be in contact with NBC and the Adjudication Board in order to ensure that the project is developing according to the proposal and in line with the application criteria and rules.