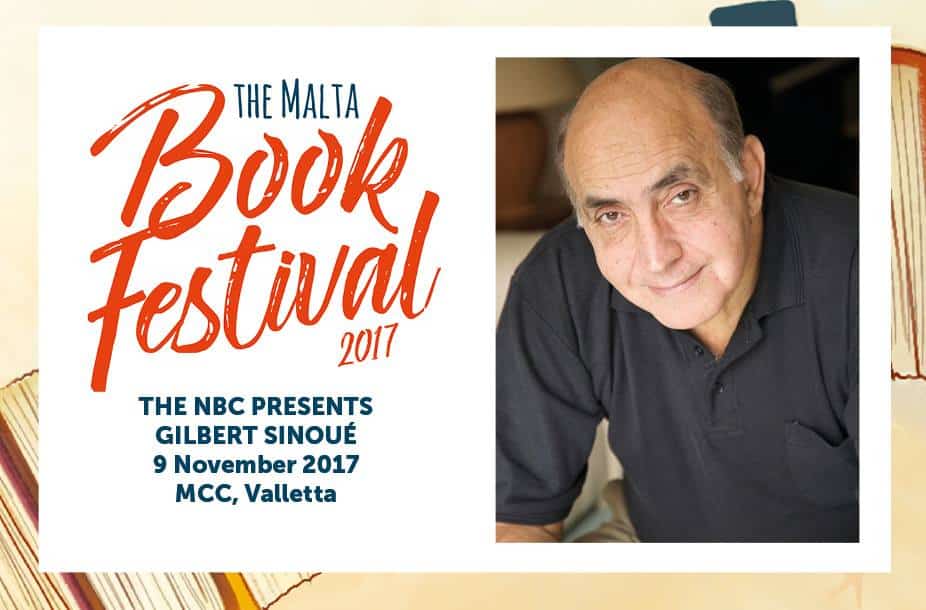 Gilbert Sinoué, the renowned French-Egyptian novelist, will appear in an event dedicated to his literary work on Thursday 9 November at M.A. Grima Hall, MCC, starting 19:45 pm. The author, whose works are considered modern classics in the genre of the historical novel, will be talking to Prof. Toni Aquilina about his experiences as an author, the political and social themes that underpin his literary work, the importance of history and other aspects of his artistic career.

Trained as a classical guitarist, Sinoué started his career as a writer at the age of 40 when he published his first novel La Pourpre et l’olivier, ou Calixte 1er le pape oublié, which earned him the Jean d’Heurs prize for best historical novel. Two years later, he published his second work, Avicenne ou La route d’Ispahan, relating the life of Avicenna, the Persian doctor, philosopher and scientist. Almost all of the work he has published since then falls under the genre of the historical novel, which makes his presence in the Festival very relevant as the chosen theme for the Festival this year is the concept of truth in literature.

Historical prose fiction is a literary genre in which the plot takes place in a setting located in the past. The narrative tends to be very thorough in its description of the manners, social conditions and other details of the period depicted. This tension between historical authenticity, or historicity, and fiction frequently becomes a point of comment for readers and popular critics, while scholarly criticism frequently goes beyond this commentary, investigating the genre for its other thematic and critical interests.

During the talk, there will be selected readings of excerpts of the author’s work and the event will be followed by a Q&A session with the audience. Later in the evening, at 20:30, the author will be present at the stand of the French Embassy to sign copies of his work and talk to members of the public.