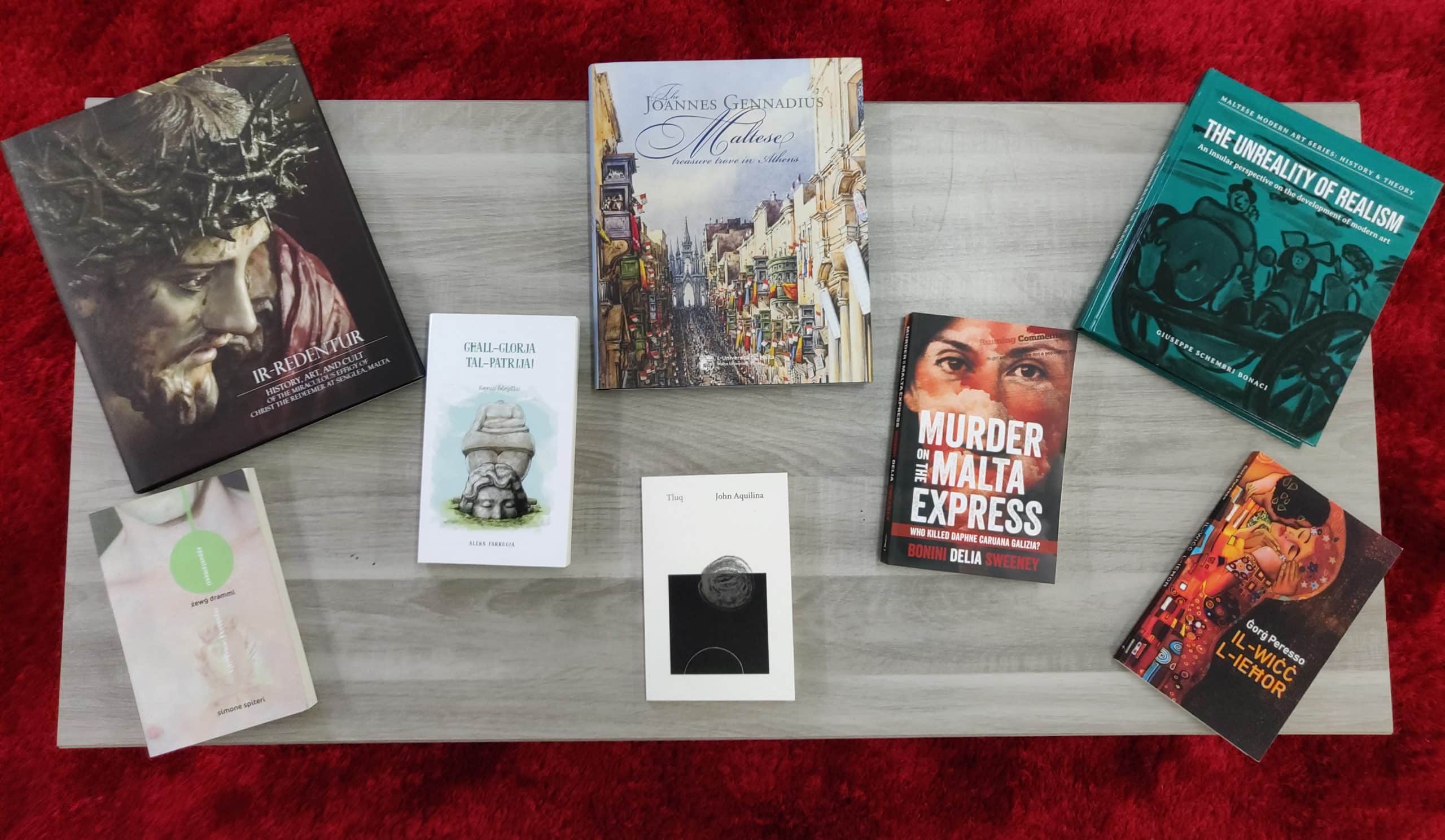 The National Book Council has announced the winners of the 2020 National Book Prize for books published in Malta in 2019. The Prize celebrates the highest achievements in literary and research publishing across nine competitive categories.

Owing to the extraordinary circumstances, the awards ceremony was held online, and for the very first time broadcast to the public on the National Book Council’s Facebook page and website. The streamed ceremony was hosted by veteran TV broadcaster John Demanuele.

In his opening speech, National Book Council (NBC) Executive Chairperson Mark Camilleri noted that 2020 has been a difficult year for the book industry, which was particularly hard-hit by the economic crisis left in the wake of the ongoing global pandemic which followed a period of political turmoil. Nonetheless, publishers and authors have kept to their work, as has the National Book Council with events like the Malta Book Festival. Once again celebrating literary culture, on the occasion of the National Book Prize the Council is awarding the best books published in 2019, and their authors and publishers, with deserved acknowledgement for their invaluable work. Despite the disruption brought on by the pandemic, the seed of civilisation represented by books remains well ingrained in our social fabric. Looking towards the future, Camilleri observed that with the significant support of the Council, the industry needs to keep strengthening and consolidating its digital transition and to bring books to the online realm.

The shortlist for the 2020 National Book Prize contained 44 titles, published in 2019. The winners included the novel Il-Wiċċ l-Ieħor (Horizons) by Ġorġ Peresso, the short-story collection Għall-Glorja tal-Patrija!: Kapriċċi Patrijottiċi (SKS Publishers) by Aleks Farrugia, and the book of plays Żewġ Drammi: Appuntamenti/Repubblika Immakulata (published by the author) by Simone Spiteri. In the research categories, Arnold Cassola’s The Joannes Gennadius Maltese Treasure Trove in Athens (Malta University Press) won the Prize for General Research, and Ir-Redentur: History, Art and Cult of the Miraculous Effigy of Christ the Redeemer at Senglea, Malta (Midsea Books, Senglea Collegiate Chapter) edited by Jonathan Farrugia won the Prize for Biographical and Historiographic Research. The Prize for Literary Nonfiction was awarded to Murder on the Malta Express: Who Killed Daphne Caruana Galizia? (Midsea Books Ltd.), co-authored by Carlo Bonini, Manuel Delia and John Sweeney. The Unreality of Realism: An Insular Perspective on the Development of Modern Art authored by Giuseppe Schembri-Bonaci and published by Horizons won the Prize for Best Book Production. The Prizes in the categories for Poetry in English and Translation were not awarded.

John Aquilina won the first prize for Poetry in Maltese with his collection Tluq (Edizzjoni Skarta). Having previously won the National Book Prize for Poetry in 2011 for his first collection Leħnek il-Libsa Tiegħi, Aquilina is also the recipient of the Poet Laureate Award. The Award for Best Emergent Writer went to Lara Calleja. The Lifetime Achievement Award, in recognition of an accomplished literary career and long list of publications including plays, short stories, novels, and non-fiction, was conferred on Trevor Żahra

The ceremony can be viewed again here:

Minister for Education and Employment Justyne Caruana congratulated all shortlisted and winning authors for their work and remarked on the importance of fostering a healthy reading culture from a young age, perhaps also with a book as Christmas gift. Reading not only boosts creativity, but also contributes towards a developed society that enjoys the participation of active, critical-thinking citizens. The importance of a writer’s work and reading, Minister Caruana added, is well understood by the Government, which is why authors’ royalties from book sales will be taxed at a 15% flat-rate from January 2021 as part of the latest national budget measures.

H.E. President George Vella’s opening words paid tribute to the late Prof. Oliver Friggieri, one of the greatest writers and thinkers of our time, whose writings will remain a valuable part of Malta’s literary heritage, just as they have already been a source of inspiration for many writers. President Vella observed that books and reading are key to success, foundational for young people as they mature into tomorrow’s leaders, but also deeply tied to the universal values of empathy, respect and a genuine interest in that which is different.

Occasions such as the National Book Prize, the President noted, provide an important opportunity for the country to show its appreciation for the efforts of local writers and publishers who year on year present an impressive number of quality publications covering a wealth of literary genres and Melitensia. While congratulating the National Book Prize winners, President Vella thanked the authors, publishers, the National Book Council and all those who contributed to the growth of Maltese literature.

The National Book Council would like to thank the members of the jury who served on the adjudication board for the National Book Prize 2020; Prof. Carmen Depasquale, Mr Mario Ellul and Ms Maria Giuliana Fenech for the categories ‘General Research’,’Biographical and historiographic research’ and ‘Literary Nonfiction’; Mr. Kevin Saliba, Dr Josette Attard and Mr Mark Vella for the remaining literary categories, and Joanne Sciberras from Malta Libraries for the books classification. Thanks also go to Justine Sommerville, Kristy Borg and Ruth Ancilleri, the adjudicators of the Premju Terramaxka for children and adolescents, whose prizes were awarded during the opening night of the Malta Book Festival 2020 – virtual edition.

The Council is proud of the high standards of the National Book Prize and the prestige it carries. While the Prize is bound to elicit differing reactions from different schools of thought, the Council celebrates these differences in a healthy book culture. The Prize’s objective remains that of presenting to the public books of the highest quality and literary value, which one is sure to find in Maltese publications. Therefore we take this opportunity to encourage the public to buy these books by using the online facilities of local publishers and continue supporting the local publishing industry.

WINNER OF THE CATEGORY ‘POETRY IN ENGLISH’
PRIZE NOT AWARDED

WINNER OF THE CATEGORY ‘ TRANSLATION’
PRIZE NOT AWARDED

WINNER OF THE CATEGORY ‘LITERARY NON-FICTION’
CARLO BONINI, MANUEL DELIA, AND JOHN SWEENEY FOR THE BOOK

Murder on the Malta Express: Who Killed Daphne CARUANA GALIZIA?

WINNER OF THE CATEGORY ‘GENERAL RESEARCH’
ARNOLD CASSOLA FOR THE BOOK

WINNER OF THE CATEGORY ‘BIOGRAPHICAL AND HISTORIOGRAPHICAL RESEARCH’
JONATHAN FARRUGIA (ed.) FOR THE BOOK

Ir-Redentur: History, Art and Cult of the Miraculous Effigy of Christ the Redeemer at Senglea

The Unreality of Realism: An Insular Perspective on the Development of Modern Art