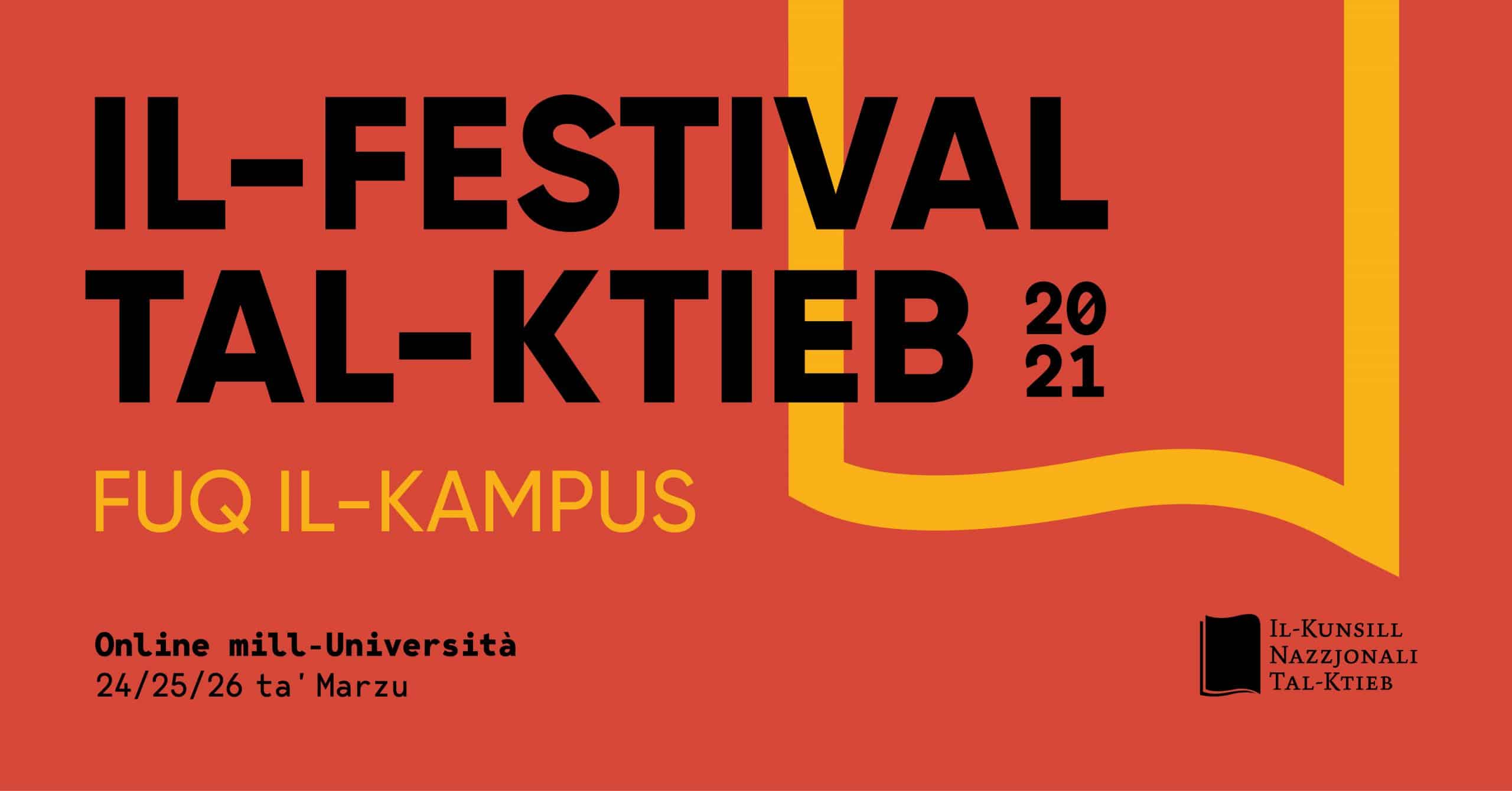 The National Book Council (NBC) is pleased to announce the dates of the 2021 Campus Book Festival, which is this year taking place online for the very first time between Wednesday 24 and Friday 26 March 2021.

Following the positive response to last November’s 2020 Malta Book Festival, the NBC is again working towards presenting University of Malta students and the general public with an extraordinary edition of the Campus Book Festival. Taking place entirely online, the programme of Festival events will be streamed on the National Book Council’s Facebook page and website from the Faculty of Arts Library. It is the aim of the NBC to make the best of current limitations and take advantage of an online transition to reach wider and more diverse audiences than usual physical capacity would allow at the University of Malta Quadrangle.

A programme of events, curated specifically for the Festival’s regular audience of university students but also the general public, and organized in collaboration with local publishers, University of Malta Departments and student organizations, will be published shortly. The programme includes book launches, thematic discussions, and interviews with the participation of established and up-and-coming local and international writers and researchers, and an open mic session supported by Inizjamed.

The  Festival’s main international guest will be the American poet and memoirist Mark Doty. Doty is the award-winning author of nine volumes of poetry, three memoirs, and essay collections. Many of them, including the New York Times bestselling memoir Dog Years (2007), U.S. National Book Award winning Fire to Fire: New and Selected Poems (2008), have been met with critical acclaim and a wide popular audience. With his poetry collection My Alexandria (1993), Doty became the first U.S. author to win the UK’s Poetry Book Society T.S. Eliot Prize. His second work of non-fiction, Firebird (1999), has been described as an evocative memoir of growing up gay in baby-boom America. As an accomplished poet of elegant, intelligent verse, Doty has often been compared to James Merrill, Walt Whitman and C.P. Cavafy. His most recent publication, What Is the Grass – Walt Whitman in My Life (W.W. Norton, 2020). Doty is currently Distinguished Professor and Director of Writers House at Rutgers University.

Seven local publishers will be participating in the Festival – BDL, Horizons, Merlin Publishers, Klabb Kotba Maltin/Midsea Books, Faraxa Publishing, Kite Group and SKS – presenting a number of new books and providing audiences with special discounts on books sold on the occasion of the Festival. In the coming days the NBC website will be hosting a page with a list of specially discounted books.

The full programme of events will be released in the coming days. All activities will be broadcast online on the National Book Council’s website, its Facebook page and YouTube channel between 24-26 March. For further details visit the NBC’s website or its Facebook page, or alternatively get in touch with Matthew Borg at [email protected] or to Andrew Ricca at [email protected]