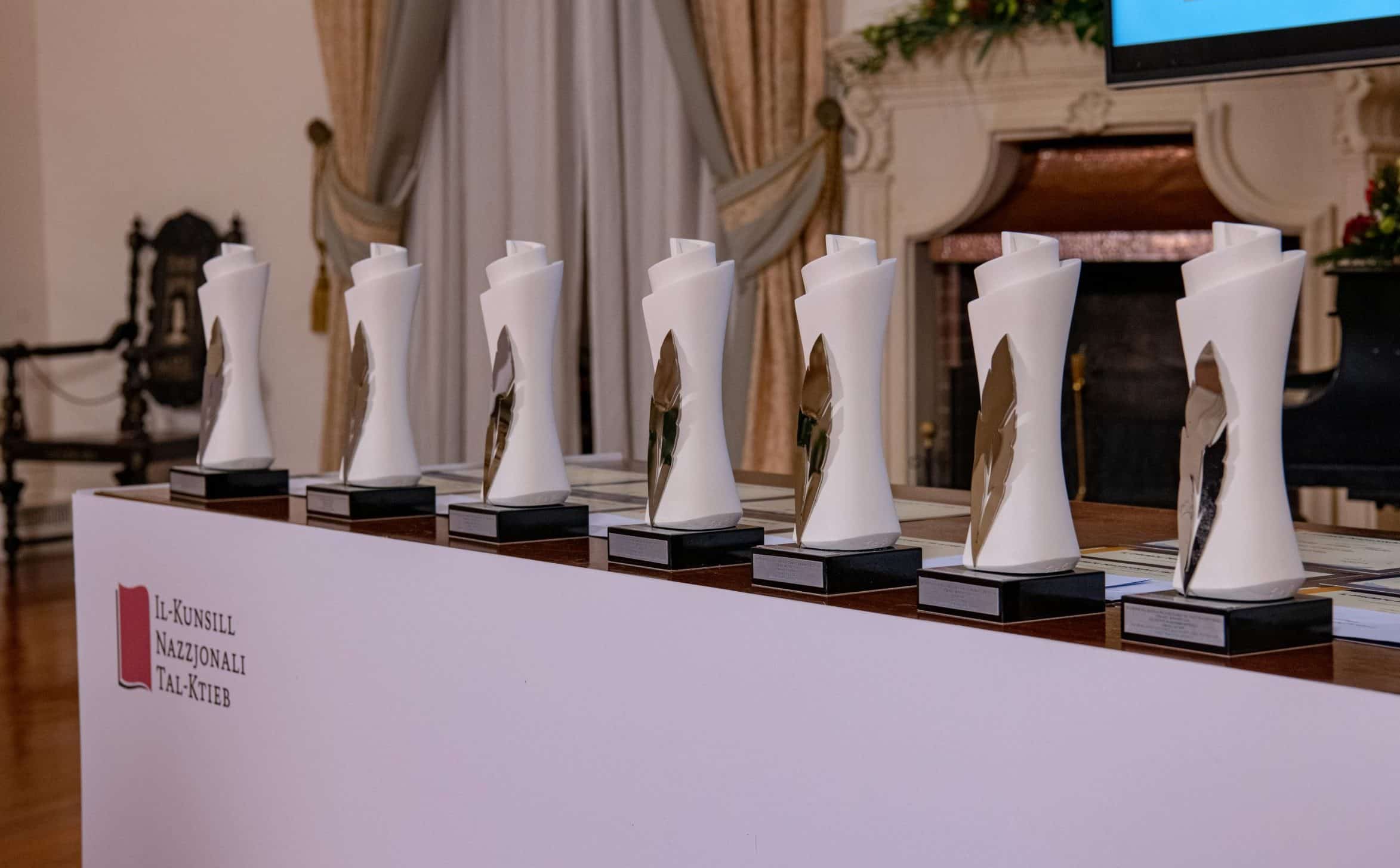 The winners of the 2021 National Book Prize have been announced this evening during a ceremony held at the Auberge de Castille under the auspices of the Office the Prime Minister and attended by the Permanent Secretary for the Ministry for Education Dr Francis Fabri. The National Book Prize is presented annually by the National Book Council with the aim of celebrating the highest achievements in literary and research publishing in Malta.

In his opening address, the National Book Council (NBC) Executive Chairperson Mark Camilleri welcomed all National Book Prize finalists to an awards ceremony that was once again gathering authors and publishers under one roof – a ceremony which also commemorates the 50th anniversary since the National Book Prize was first awarded in 1971. Camilleri noted that despite the challenges which the previous year brought on the local book industry, the number of publications produced in 2020 was heartening and that the ceremony would also be in recognition of the resilience of Maltese publishing. Camilleri affirmed that 2021 was another year of rigorous work for the Council and that his primary objective in his new role is to see the Council strengthened to be able to better support the industry, and renewed through synergies with other entities and public institutions. Above all else, the National Book Council will be open to any collaboration out of which Maltese publishing will benefit at present and in the future. Camilleri congratulated all finalists adding that the shortlisted books competing for the National Book Prize, authored by new and established authors, are representative of the excellent standards that the industry continuously strives for.

The winning titles have been selected by independent adjudication panels from a shortlist of 46 titles, published in the preceding year, across across eight competitive categories. The National Book Prize for the Novels category was awarded to Gioele Galea for the book In-Nar Għandu Isem: Noti minn Paġna Intima (Horizons). Other winners included Lara Calleja’s Kissirtu Kullimkien (Merlin Publishers) in the Short-story category, Carmel Scicluna with the poetry collection L-Ambjent li Qeridna: Poeżiji (2017-2020) (Horizons), Immanuel Mifsud and Toni Sant for Jien – Noti – Jien: Ħsejjes u Stejjer (Klabb Kotba Maltin) in the Literary Non-Fiction category, and Paul Zahra for his translation of the final part of the first volume of Marcel Proust’s magnum opus, Mix-Xaqliba ta’ Dar Swann – Ismijiet ta’ Pajjiżi: L-Isem (self-published). The National Book Prize for General Research was awarded to Giuseppe Schembri Bonaci for The Beheading of Ignez: Katabasis, Ezra Pound and Three Maltese Artists (Horizons) – the Prize for Biographical and Historiographic Research was awarded to Martin Micallef, editor of Crux Invicta: Il-Kurċifiss Mirakuluż u l-Kapuċċini f’Għawdex (Midsea Books). Midsea Books was awarded the Prize for Best Book Production for its work on The Addolorata Cemetery.

The Award for Best Emerging Author was given to Stephen Lughermo, author of young adult novels, books for children, and the short-story collections Ċelel Bla Ħitan (Horizons, 2020). In recognition of a long standing career as an established poet and novelist, the Lifetime Achievement Award was conferred on Dr Rena Balzan – beyond her literary contributions, for several years Balzan was Associate Professor in Genetics and Molecular Biology at the Faculty of Medicine and Surgery of the University of Malta.

On the occasion of the National Book Prize’s 50th anniversary, the Permanent Secretary for the Ministry for Education Dr Francis Fabri spoke of the strong ties linking national identity and the country’s literature. He stressed the importance of writers’ and publishers’ contributions towards the development of national identity which they help shape with their works; a living and dynamic identity such as that of Malta’s also relies on writers’ continued efforts to renew it with observations that capture the country’s social, political, and economic realities. Dr Fabri concluded his address with reference to the words by the French philosopher Jean-Paul Sartre on how written words are in themselves action, commitment, and the impetus for change in the reader and the community.

The National Book Council would like to thank the members of the jury who served on the adjudication board for the 2021 National Book Prize; Prof. William Zammit, Mr Mario Ellul and Ms Maria Giuliana Fenech for the categories of General Research, Biographical and Historiographic Research and Literary Non-Fiction, Mr John Grech, Dr Stephen Bonanno and Ms Rowna Baldacchino for the literary categories, and Malta Libraries CEO Ms Cheryl Falzon for the classification. The NBC also extends its thanks to Dr Nicole Bugeja, Ms Kristy Borg and Ms Ruth Ancilleri, the adjudicators of the Premju Terramaxka for children and adolescents which was awarded during the opening night of the 2021 Malta Book Festival.