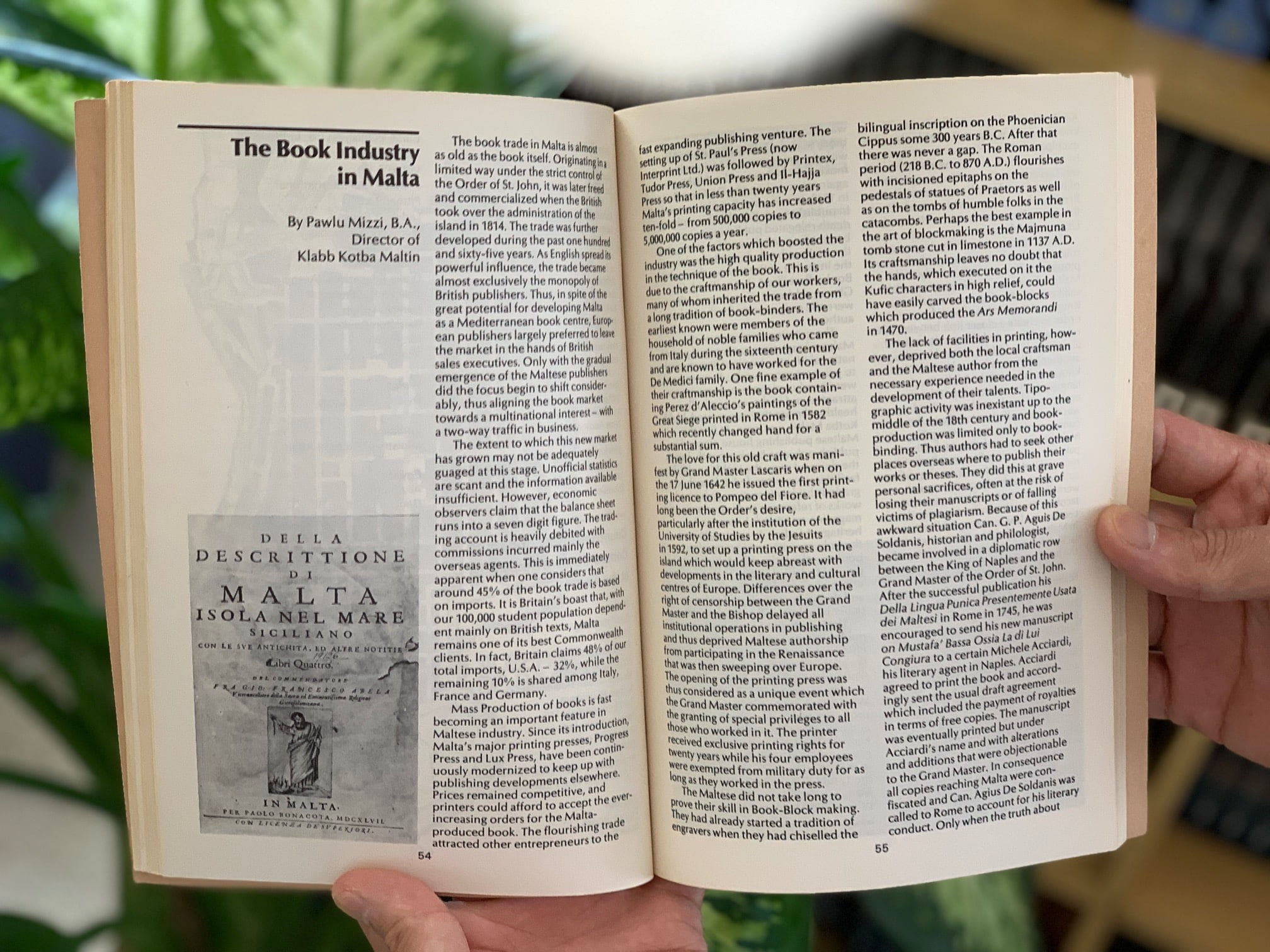 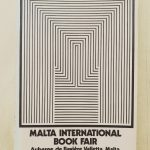 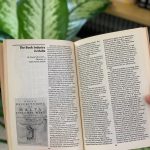 The Book Industry in Malta

The book trade in Malta is almost as old as the book itself. Originating in a limited way under the  strict control of the Order of St.John, it was later freed and commercialized when the British took over the administration of the island in 1814. The trade was further developed during the past one hundred and sixty-five years. As English spread its powerful influence, the trade became almost exclusively the monopoly of British publishers. Thus, in spite of the great potential for developing Malta as a Mediterranean book centre, European publishers largely preferred to leave the market in the hands of British sales executives. Only with the emergence of the Maltese publishers did the focus begin to shift considerably, thus aligning the book market towards a multinational interest— with a two-way traffic in business.

The extent to which this new market has grown may not be adequately gauged at this stage. Unofficial statistics are scant and the information available insufficient. However, economic observers claim that the balance sheet runs into a seven digit figure. The trading account is heavily debited with commissions incurred mainly the overseas agents. This is immediately apparent when one considers that around 45% of the book trade is based on imports. It is Britain’s boast that, with our 100,000 student population dependent mainly on British texts, Malta remains one of its best Commonwealth clients. In fact, Britain claims 48% of our total imports, U.S.A. — 32%, while the remaining 10% is shared among Italy, France and Germany.

Mass Production of books is fast becoming an important feature in Maltese industry. Since its Malta’s major printing presses, Progress Press and Lux Press, have been continuously modernized to keep up with publishing developments elsewhere. Prices remained competitive, and printers could afford to accept the ever-increasing orders for the Malta-produced book. The flourishing trade attracted other entrepreneurs to the fast expanding publishing venture. The setting up of St. Paul’s Press (now Interprint Ltd.) was followed by Printex, Tudor Press, Union Press and II-Hajja Press so that in less than twenty years Malta’s printing capacity has increased ten-fold — from 500,000 copies to 5,000,000 copies a year.

One of the factors which boosted the industry was the high quality production in the technique of the book. This is due to the craftmanship of our workers, many of whom inherited the trade from a long tradition of book-binders. The earliest known were members of the household of noble families who came from Italy during the sixteenth century and are known to have worked for the De Medici family. One fine example of their craftmanship is the book contain ing Perez d’Aleccio’s paintings of the Great Siege printed in Rome in 1582 which recently changed hand for a substantial sum.

The love for this old craft was manifest by Grand Master Lascaris when on the 17 June 1642 he issued the first printing licence to Pompeo del Fiore. It had long been the Order’s desire, particularly after the institution of the University of Studies by the Jesuits in 1592, to set up a printing press on the island which would keep abreast with developments in the literary and cultural centres of Europe. Differences over the right of censorship between the Grand Master and the Bishop delayed all institutional operations in publishing and thus deprived Maltese authorship from participating in the Renaissance that was then sweeping over Europe. The opening of the printing press was thus considered as a unique event which the Grand Master commemorated with the granting of special privileges to all those who worked in it. The printer received exclusive printing rights for twenty years while his four employees were exempted from military duty for as long as they worked in the press.

The Maltese did not take long to prove their skill in Book-Block making. They had already started a tradition of engravers when they had chiselled the bilingual inscription on the Phoenician Cippus some 300 years B.C. After that there was never a gap. The Roman period (218 B.C. to 870 AD.) flourishes with incisioned epitaphs on the pedestals of statues of Praetors as well as on the tombs of humble folks in the catacombs. Perhaps the best example in the art of blockmaking is the Majmuna tomb stone cut in limestone in 1137 A.D. Its craftsmanship leaves no doubt that the hands, which executed on it the Kufic characters in high relief, could have easily carved the book-blocks which produced the Ars Memorandi in 1470.

The lack of facilities in printing, however, deprived both the local craftsman and the Maltese author from the necessary experience needed in the development of their talents. Tipographic activity was inexistant up to the middle of the 18th century and book-production was limited only to book-binding. Thus authors had to seek other places overseas where to publish their works or theses. They did this at grave personal sacrifices, often at the risk of losing their manuscripts or of falling victims of plagiarism. Because of this awkward situation Can. G. P. Aguis De Soldanis, historian and philologist, became involved in a diplomatic between the King of Naples and the Grand Master of the Order of St. John. After the successful publication his Della Lingua Punica Presentemente Usata dei Maltesi in Rome in 1745, he was encouraged to send his new manuscript on Mustafa’ Bassa Ossia La di Lui Congiura to a certain Michele Acciardi, his literary agent in Naples. Acciardi agreed to print the book and accordingly sent the usual draft agreement which included the payment of royalties in terms of free copies. The manuscript was eventually printed but under Acciardi’s name and with alterations and additions that were objectionable to the Grand Master. In consequence all copies reaching Malta were confiscated and Can. Agius De Soldanis was called to Rome to account for his literary conduct. Only when the truth about Acciardi’s printing piracy became known was Can. Agius De Soldanis exculpated of the charge of sedition. In compensation for the hardship he was forced to suffer and in recognition of his literary talents he was created the first librarian of the newly formed Biblioteca Tanseana now the National Library of Malta.

The consciousness in the important role of the book coincided with the pioneering interest in the study of the Maltese language. De Soldanis was himself keen in diffusing it among the Knights of the Order of St. John in order to create a closer link between the rulers and the ruled. These views were also shared by Mikiel Anton Vassalli, another Maltese scholar, later also known as father of the Maltese language, who believed that the propagation of books in the vernacular was the most efficient media in the conquest of ignorance among the Maltese masses. Unfortunately his patriotic zeal in the Discorso Preliminare received little attention from the ruling authorities and his frequent appeals were discarded as revolutionary and Jacobite. Thus the entire nineteenth century was lost to many publications in Maltese and the few that were printed lacked the attraction needed to found the basis for a stable industry.

The first real attempt to start a Maltese publishing house came in 1895. Alphonse Maria Galea, a philantropist and social worker, who started an apprentice course in printing at the Salesian Fathers in Sliema, organized a series of publications called Cotba tal-Mogħdija taż-Żmien. The books were attractively produced and varied in interest. In spite of their relatively high price, two pence per copy — which was then almost the entire pay packet for the day — it attracted enough customers to make the venture economically viable. More than three thousand copies in each title were sold and for more than 20 years the Maltese reading public was secured of a much needed educational commodity. When the Maltese alphabet was standardized in 1921, the urge for more Maltese literature grew and later with the emergence of Maltese literary movements, organized publishing was again taken in hand by Dr. Guze in 1938. In two years Bonnici succeeded in publishing six titles but his untimely death relegated publishing to just a bookselling activity and for many years the Maltese book depended solely on the initiative of the authors themselves. Booksellers like A. J. Aquilina & Co., Giovanni Muscat, Cumbo and others were the only sources for the Maltese authors.

The growing awareness of the Maltese language as an integral part of national identity inspired literary circles to produce more works. As more books were produced more consumers were attracted and in the economically healthy climate that was created, Klabb Kotba Maltin was born. At first this Maltese publishing house planned to publish only one book a month, but as the demand grew the Klabb’s publishing facilities were extended. It launched a graded children’s section, published works of reference and issued a monthly magazine on Malta’s history and heritage. Merlin Library, too, joined the industry with production of more books particularly with Maltese translations of Ladybird books. In this way the efforts to our publishers proved fruitful and the Maltese book market became richer by at least 150 new titles a year.

These facts and figures in Maltese publishing are good pointers to an efficient book industry. The ingredients are all there: modern machinery, experience, technical know-how and above all entrepreneurship and enthusiasm. What is perhaps needed are first-class producers with visions that are wider and better than these ordinary shopkeepers. This is what the Prime Minister hinted at when, in a message to the nation broadcast on television on the 12 July 1976, he suggested that Malta’s book industry could become the pride of the Mediterranean. 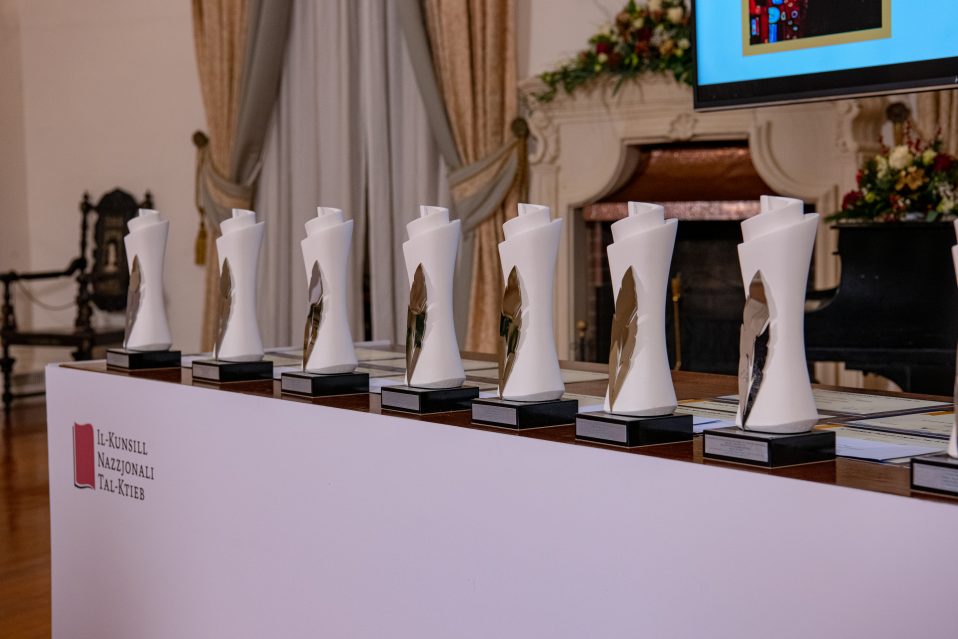