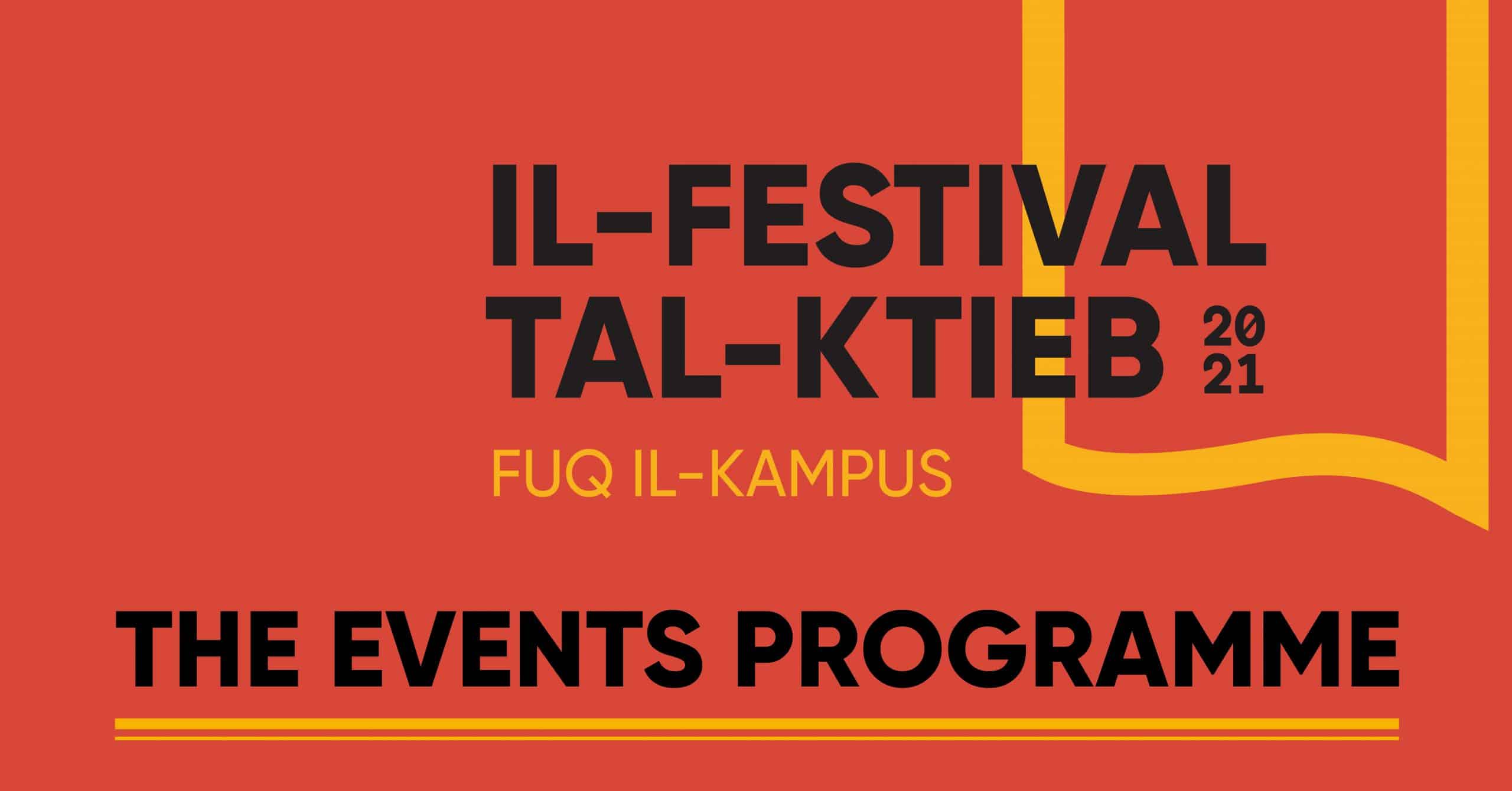 The National Book Council is presenting the programme of cultural events for the Campus Book Festival 2021, taking place entirely online for the very first time between 24–26 March.

Curated specifically for the festival’s regular audience of university students and also the wider public, the programme of online events has been organised in collaboration with a number of University of Malta departments, student organisations and local publishers. All of the programme’s seventeen events – including book launches, book clubs, an open mic session, and discussions with the participation of local and international writers and researchers – will be streaming on the National Book Council Facebook page and website over the three days of the festival.

The aim of the Campus Book Festival remains the promotion of all forms of literature, Melitensia and works of research, by providing local publishers with exposure and a platform from where they can sell and promote their publications with an audience of post-secondary and tertiary students. The eight exhibitors in this 2021 edition are BDL, Horizons, Merlin Publishers, Klabb Kotba Maltin/Midsea Books, Faraxa Publishing, Kite Group, SKS and Għaqda tal-Malti – Università – each of which are presenting a number of new titles and providing various special discounts on selected titles for the duration of the Festival or throughout the month of March. Visit the Exhibitors’ Page section of the online programme for a list of discounted and recommended titles. 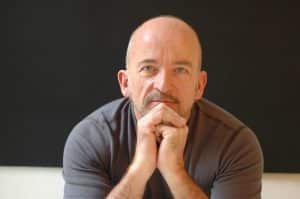 The international guest for this year’s Campus Book Festival is American poet and memoirist Mark Doty, who will be participating in a book-club session with University students lead by Dr Mario Aquilina and centred on his memoir Firebird (HarperCollins, 1999) on Thursday 25 March. Doty will be returning on Friday 26 March for an extensive interview with Head of English Department at UM prof. James Corby on his literary and non-literary output. Mark Doty will also be one of the readers during the open mic session organised in collaboration with Inizjamed and streaming later in the evening of the same day. Mark Doty was the first American to win the T.S. Eliot Prize in the U.K in 1995, and in 2008 he won the National Book Award for the book Fire to Fire: New and Selected Poems (HarperCollins, 2008). He is the author of several poetry books – among which Bethlehem in Broad Daylight (D.R. Godine, 1991), and Deep Lane (W.W. Norton, 2015) – and memoirs and nonfiction books such as Still Life with Oysters and Lemon: On Objects and Intimacy (Beacon Press, 2000) and Dog Years (HarperCollins, 2007). Doty is currently Distinguished Professor and Director of Writers House at Rutgers University. His most recent publication, What Is the Grass – Walt Whitman in My Life (W.W. Norton, 2020), blends biography, criticism and memoir in an attempt to grasp Whitman’s deeply hopeful vision of human possibility.

The Festival will this year again be serving as a platform for the launch of new literary titles, translated literature and works of nonfiction. In an interview with journalist Kurt Sansone on 25 March, SKS will be launching the second volume of memoirs by Dr Alfred Sant, Confessions of a European Maltese – The Middle Years 1975-1992 (2021).

In an interview with fellow author Simone Inguanez, prize-winning author Stephen Lughermo will be speaking about his new short story collection published by Horizons, Ċelel Bla Ħitan, featuring a set of constrained characters. On 24 March, Horizons are also launching the Maltese edition of Jim Crace’s Kwarantina (Quarantine), translated into Maltese by Charles Flores, who will be discussing the Booker Prize-shortlisted novel and winner of the 1998 Whitbread Novel Award with academic and broadcaster Toni Sant. In the realm of the new Maltese languages translations, Faraxa Publishing will be launching their latest title in the ‘Traduzzjonijiet Faraxa’ translation series – the play by Albert Camus, Kaligula, translated by Toni Aquilina. Prof. Aquilina’s talk on 24 March will be accompanied by two performances by Clive and Claire Piscopo from Theatre Lab Malta.

A number of events feature collaborations between local publishers and students organisations on campus. Among them, the launch of a new title from Kite Group, Leading Cases in Administrative Law (2021). Cristina Aquilina from the European Law Student’s Association (ELSA) will be interviewing the author of this collection of leading cases in Maltese administrative law, covering a period of more than a hundred years, during which the Maltese Courts reviewed acts of the Administration. BDL Books is also presenting a discussion on legal administrative remedies, presenting Dr Ivan Mifsud’s monograph The Ombudsman Remedy in Malta: Too Soft a Take on the Public Administration? (2020), in a discussion on the Ombudsman’s role in Malta, and this institution’s track record and effectiveness in an interview with Dr Robert Musumeci.

The History of Art and Fine Art Students’ Association (HOASA), together with Midsea Books, is presenting an interview with Dr Keith Sciberras on his latest publication Mattia Preti: Life and Works (2020), shedding new light on the life and works of the High Baroque artist who left an artistic imprint on the island like no other had done before or indeed after. To discuss the process behind the 2020 National Book Prize-winning work by Midsea Books on the history, art and cult of the iconic statue, Senglea’s Redentur, on March 26 the book’s editor Dr Jonathan Farrugia will be joined by the conservator responsible for the conservation of the statue, Valentina Lupo from Atelier del Restauro.

In collaboration with the Department of Philosophy, on 25 March the Festival will be hosting an exchange moderated by Dr Jean-Paul De Lucca between Francois Zammit and Dr Enrico Panai, Human Information Interaction Specialist and author of Skip! The Art of Avoiding Projects. The discussion will address questions relating to the application of philosophy to address present-day challenges, be it the apparently simple technology of writing or the complexities of emerging technologies.

Frequent collaborators of the Campus Book Festival Għaqda tal-Malti – Università will also be addressing the application of digital technologies on 24 March in a discussion between Head of Department Dr Michael Spagnol and Sephora Francalanza, introducing the newly-launched research portal of the Department of Maltese at the University of Malta: malti.mt. On the occasion of the 90th anniversary of the first publication of its longstanding journal Leħen il-Malti, Għaqda tal-Malti will be bringing together speakers who had an active role in former editorial boards, including Leanne Ellul, Joseph P. Borg and Ġorġ Mallia, ahead of the publication of the 40th edition later this year.

All Campus Book Festival events will be streaming for free on the National Book Council’s  website and Facebook page between 24–26 March.

The entire online programme can be accessed here. For more information follow our FB page and our website (www.ktieb.org). 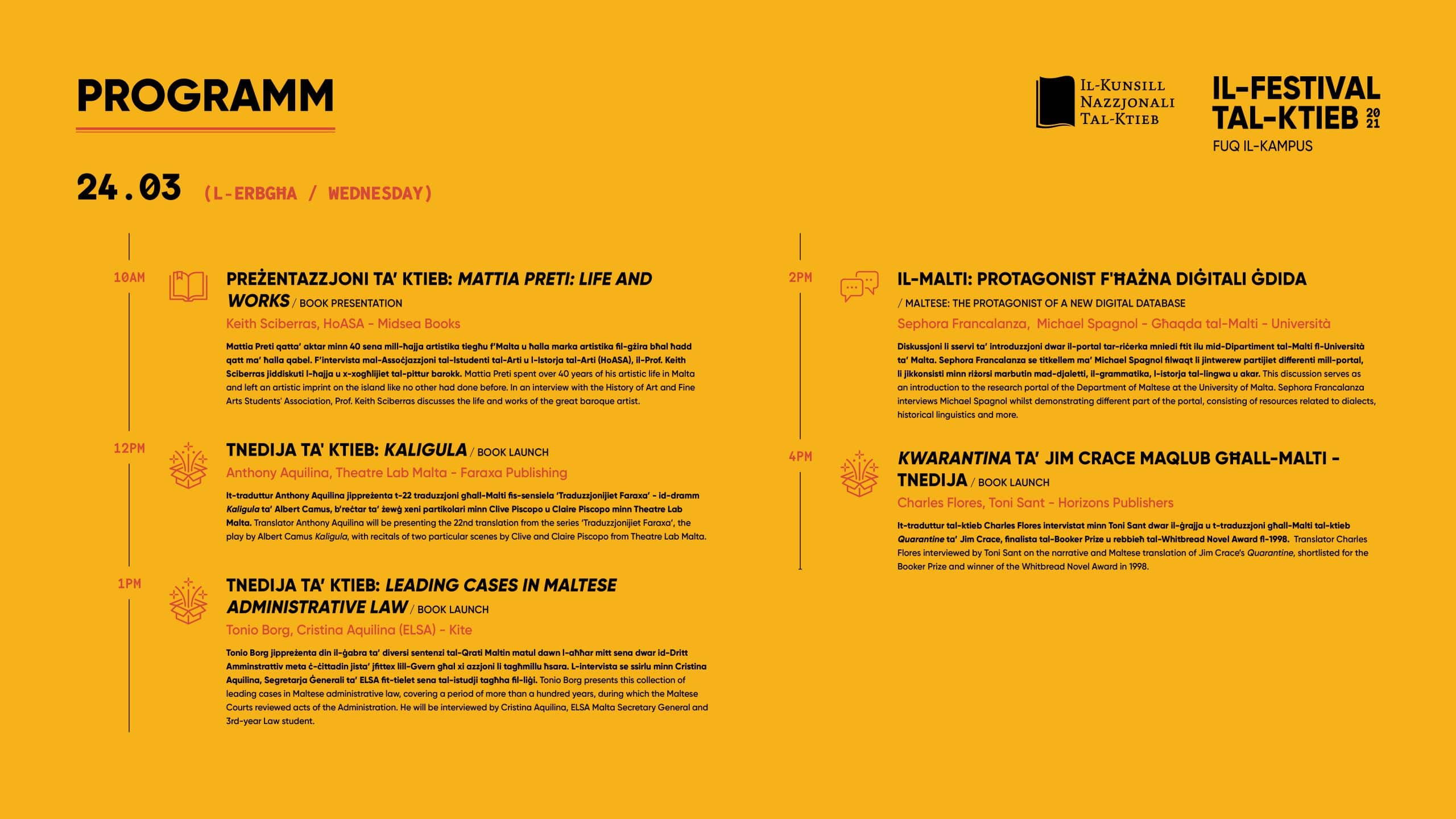 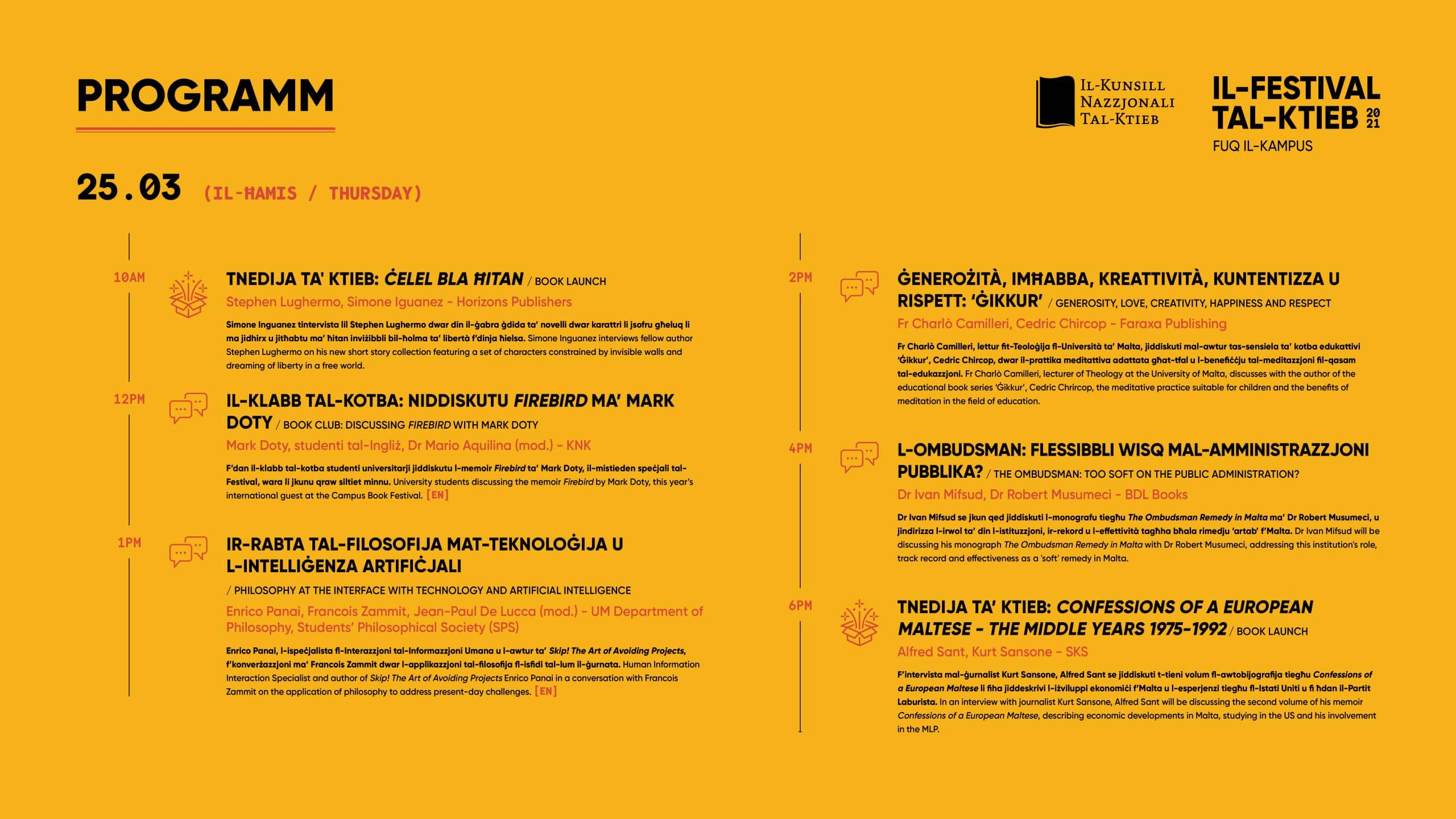 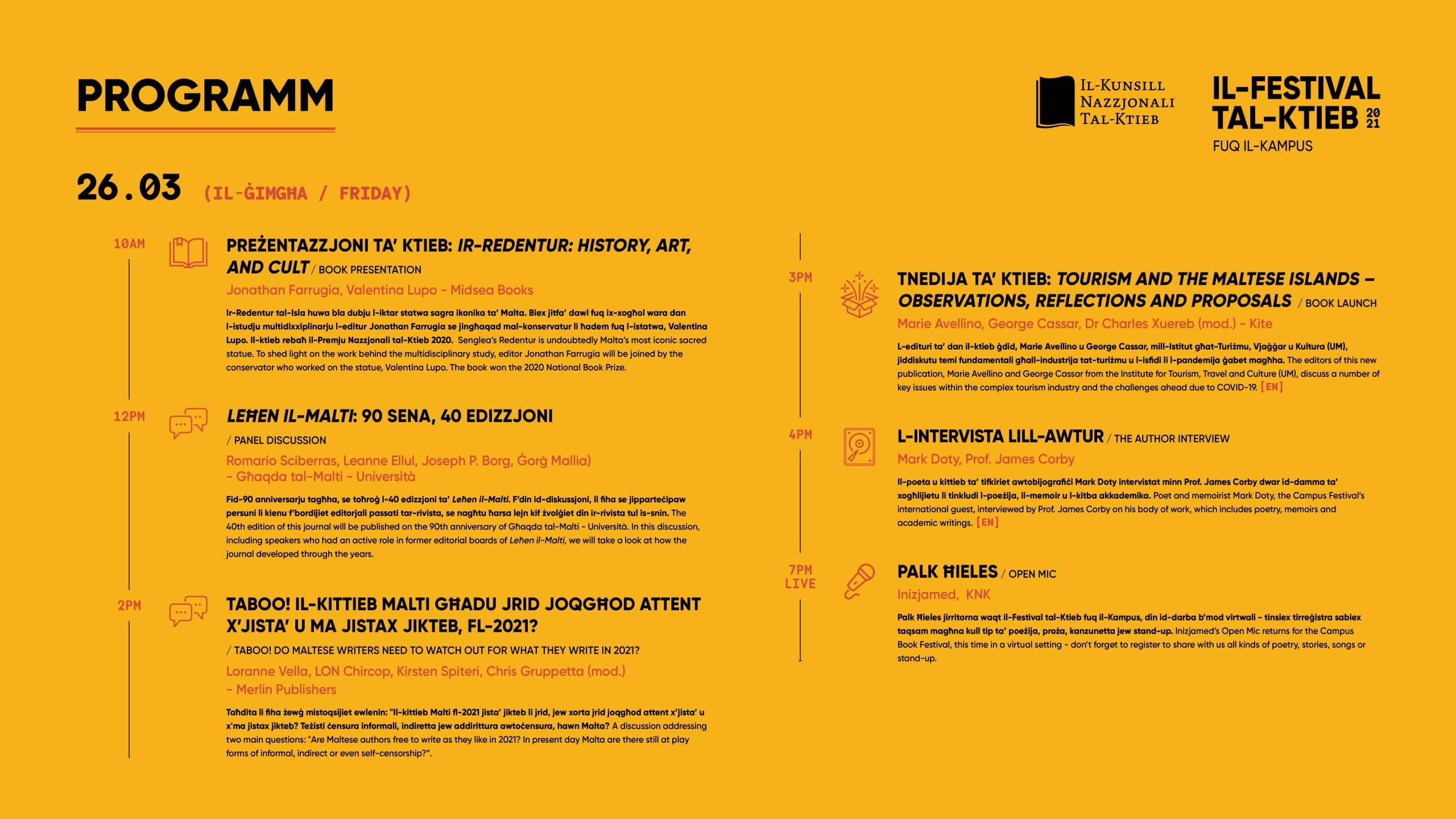