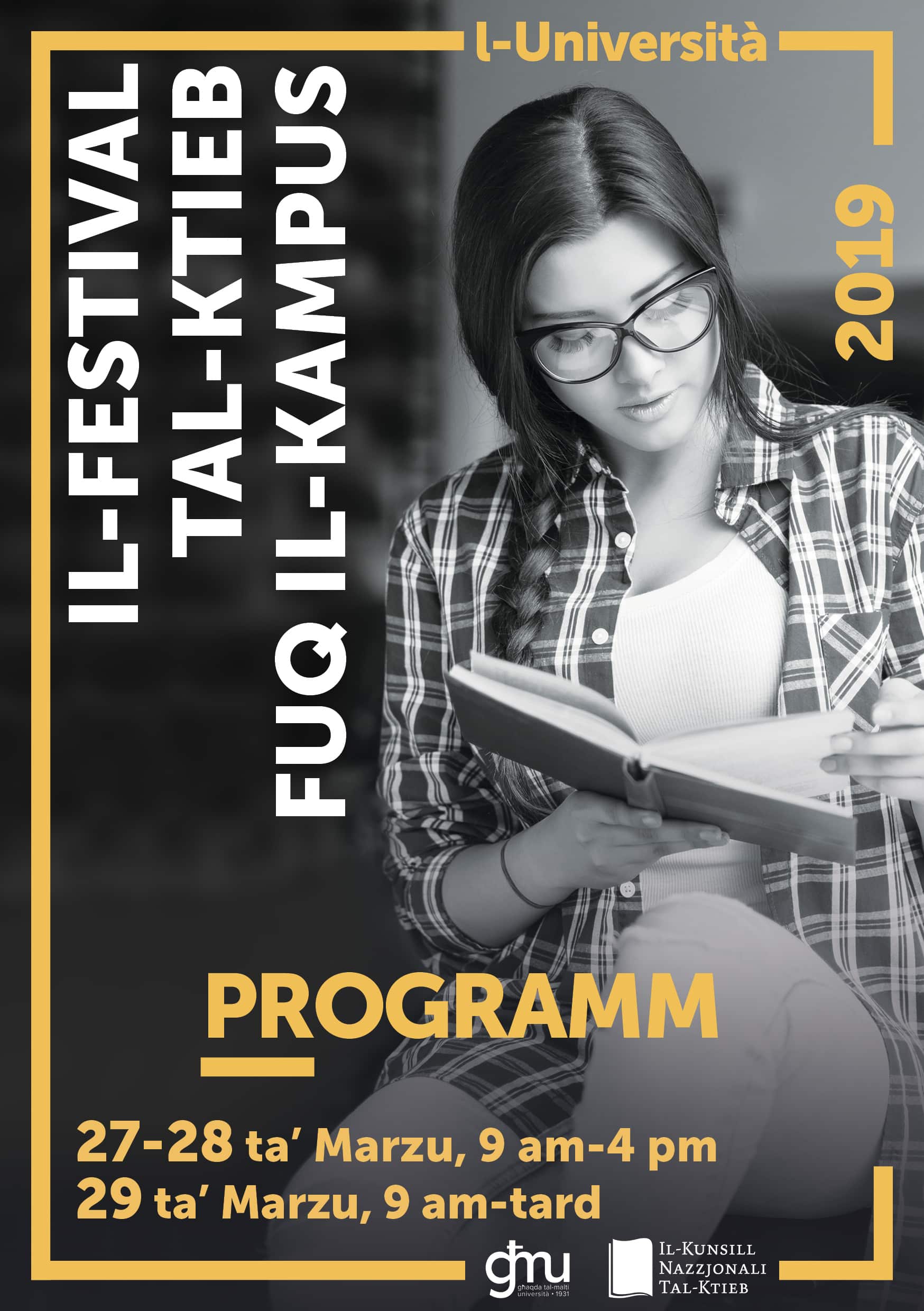 The National Book Council is pleased to release the programme of cultural events for the Campus Book Festival 2019 (FKK19). As customary, the festival will take place at the University Quadrangle on 27, 28 and 29 March, from 9 am–4 pm on Wednesday 27 and Thursday 28, and from 9 am till late on Friday 29.

The programme is packed with a variety of events and activities centred on literature and books – aimed at university students and members of the public alike. The events organised include discussions, presentations, interviews, animated readings, tours, quizzes, book launches and book presentations, among others.

The international guest for FKK19 is British poet, literary critic and translator Rod Mengham, who will be engaged in activities throughout the three days of the festival. At 1 pm on Wednesday, together with Prof. Clare Vassallo and translator Kevin Saliba, Rod will talk about aspects of translating poetry. At 10 am on Thursday a group of university and college students will discuss Rod’s latest publication Grimspound and Inhabiting Art (2018) during a book-club session with the author. At 5:30 pm on Friday award-winning poet Antoine Cassar will interview Rod about his work and career both as a poet and a literary critic. Later on the same day at 6:45 pm Rod will be the special guest of the Open Mic session organised by Inizjamed.

For the language and literature enthusiasts, not to miss are Wednesday’s events about English loan-words in Maltese and an interview with Oliver Friggieri about his childhood as narrated by himself. On Friday, Gioele Galea’s best-seller Tħabbat Xtaqtek: djarju mill-eremitaġġ will be analysed in terms of Christian spirituality, ethics and relationships, both from a spiritual and a secular point of view. On the same day, poet Antoine Cassar will be interviewed by Prof. Adrian Grima about Erbgħin Jum, which won him the 2018 National Book Prize for poetry. A book talk on Wiċċna by Zvezdan Reljić is also a highlight for the day.

For those interested in philosophy, two events are not to be missed. On Thursday Għaqda tal-Malti – Università will deliver a session of ‘Filosofija bil-Malti’ with Prof. Joe Friggieri, and on Friday at 12 pm contemporary philosophers Kurt Borg, Francois Zammit and Robert Farrugia Flores will talk about how contemporary social conditions shape the way they think, what it needs to be a philosopher in 2019, and what are the the latest trending themes for contemporary philosophy.

On Friday at 11 am key speakers in the fields of film-making, translation and adaptation (namely producer Martin Bonnici, translator Dr Giselle Spiteri Miggiani and writer Teodor Reljić) will discuss the award-winning short film Camilla, adapted from Clare Azzopardi’s short story that goes by the same name. Other events based on historical anniversaries happening this year are the one revolving around the 100th-year anniversary since women got the right to vote in the U.S, and the first woman entered University in Malta; and the 60th since Barbie made her way into the world. Other highlights include events revolving around social sciences, publishing and proofreading, history, book conservation, and teaching and learning.

New to this year is an art exhibition by various artists, showcasing original sketches and illustrations that became the hero on the covers of successful books published in Malta. The exhibition will be open on all three days of the festival.

As usual, the FKK will wrap up with a live gig, this time by Maltese band The Busker, featuring original music inspired by the sixties and seventies.

The Book Festival on Campus, which is set up by the National Book Council in collaboration with Għaqda tal-Malti – Università, is free and open to students, academics and members of the public. For more information follow our FB page and our website (www.ktieb.org). You can download the programme in pdf format here and the mobile version here.